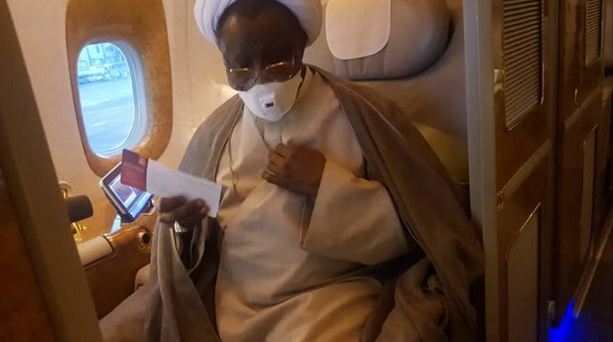 Ibraheem El-Zakzaky, the leader of the Islamic Movement in Nigeria (IMN), also known as Shiites, has expressed optimism that his return to Nigeria from India is for the best.

Naija News had reported earlier that the Shiites leader and his wife, Zeenah Ibrahim, are on their way back to Nigeria from India.

Reacting to his imminent return to Nigeria from India in a video said to have been recorded before the Shiites leader boarded his return flight to Nigeria, El-Zakzaky said he was informed earlier that he and his wife would have to leave India.

His words:  “You have already heard the messages regarding the ultimatum we were given of either we agree to be treated here on their terms or return home,” he said in Hausa.

“And they have sent government representatives here to inform us of that… In sha Allah we will embark on the journey back home. We hope this will be for the best,” El-Zakzaky said.

Earlier, the Shi’a group had through its spokesman, Ibrahim Musa, in a statement, accused the federal government of frustrating the treatment of El-Zakzaky in India.

“The Nigerian government’s interference and scuttling of the whole process rather than supervision as ordered by the court is the direct cause of the impasse. The government never wanted the medical leave in the first place, and did whatever to stop it by all means possible,” Musa had said.