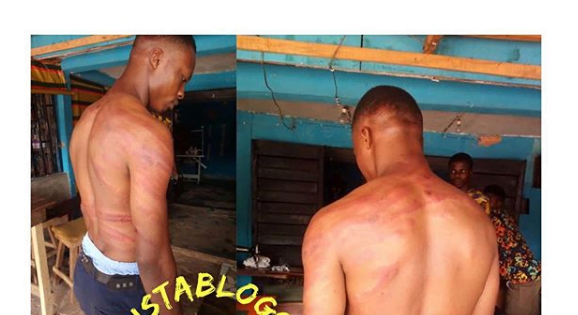 A tailor has been left with the thoughts of regretting his birthdate after he was allegedly maltreated and brutalized by some Nigerian Army Soldiers.

This online news platform understands that trouble started when the soldier was unable to deliver the clothes belonging to a Soldier’s wife who had contracted him earlier to make her clothes.

While speaking, the tailor said he could not lay hands on the clothes as the wife of the Nigerian Army Soldier refused to make herself available for measurement.

The wife of the soldier who owns the clothes with the tailor had sent one of her daughters to collect her sewed clothes but the tailor couldn’t deliver the clothes as he refused to sew them because the owner who happens to be a soldiers wife refused to make herself available.

It was reported that the wife of the soldier then sent another of her daughters to collect the cloths but all to no avail.

It was understood that the wife of the soldier then decided to come by her self  but came ranting rudely and threatening the tailor ‘just like some women would do.’

While the argument between the duo continued, the tailor said he could not argue with her as she was a lade.

The statement of the Tailor then angered the woman who then decided to invite his Soldier husband who is obviously a man to have a ‘man-to-man argument’ that led to the severe brutality of the tailor.

On the arrival of the soldier husband, the Soldier was reported to have arrived with his colleagues who stormed the shop of the tailor and reportedly whisked him away to the barracks where he was brutalised.