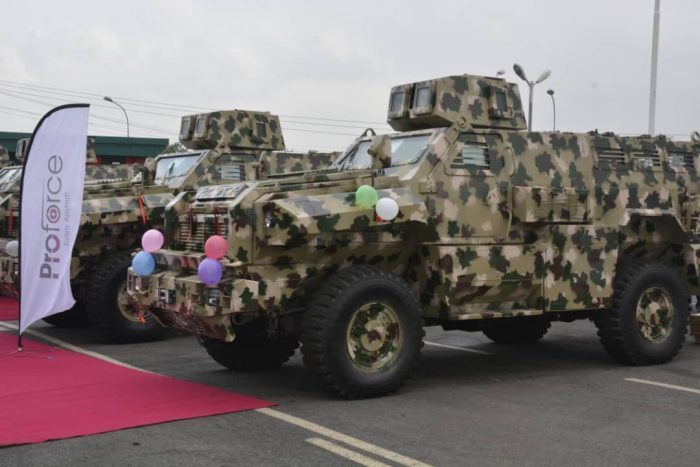 The Nigerian Army has deployed four newly acquired Mine Resistant Anti-Ambush Personnel (MRAP) Vehicles in a deliberate attempt to tackle insurgency in some parts of the country.

Naija News understands that the latest move by the Nigerian Army is not unconnected to the theatre of counter-insurgency operations in the Northeast.

The Chief of Army Staff, Lt.-Gen. Tukur Buratai, who was represented by the Chief of Training and Operations, Maj.-Gen. Enobong Udoh, was reported to have inducted the vehicles on Tuesday in Maigumeri super camp in Maiduguri.

This online news platform understands that the ceremony where the vehicles were inducted also included Sallah celebration and lunch with troops of special forces in their camp as well as the tour of the camp under renovation by the army.

Buratai was quoted to have said the MRAP vehicles would offer increased firepower, enhanced force protection against small arms as well as improved capability.

He, however warned officers of the Nigerian Army that that deploying the equipment without strong will and determination by men, cannot win war.

“You must therefore remain resolute in the discharge of your duties while strengthening your commitment to end this war in no distant time.

“Let me assure you that we shall continue to give due priority and attention to specialised training as well as improve welfare for effective employment of special forces.

“You will recall that the Nigerian Army Special Forces Command was established recently to coordinate deployment and employment of all Special Forces across the country.

“This has brought about effective and efficient utilisation of special forces within the theatre of operation.

“The recent recapture of Baga by the special forces is most instructive in this regard,” he said.