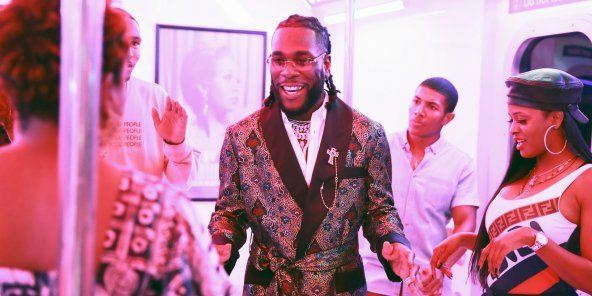 Supported by his mother and grandfather, former manager of Fela, the Nigerian superstar delivers a new album, “African Giant“, in which he remixes his musical heritage.

It’s impossible not to think of Fela when Burna Boy dropPED the jacket and tee-shirt on the stage of Afropunk Paris, July 13th, to sing shirtless, drawing and dripping abs, in front of a public in a trance. And when this 28-year-old man puts a wreath of cowrie shells on his head, we say that the “Black President” may have a worthy heir, probably more gangsta in his attitude, but capable of ruling the music from the continent.

From his first album, LIFE, to his new project released July 26, African Giant, the native of Port-Harcourt, megalopolis of southern Nigeria, has come a long way. Acclaimed everywhere, this artist is today one of the most followed Africans on the internet. Youtube and Spotify have recently distinguished him while Apple Music recently revealed that his sounds “have been streamed more than 100 million times”. This style mixer was even rewarded at the BET Awards last year in the “best international project” category, ahead of Aya Nakamura, Dosseh or Mr Eazi.

“There was Fela, of course, who is a hero for me, but my family gave me many more references”

To unlock the secret of this success, we joined the artist after his concert on the edge of the musical Scene where the last edition of Afropunk took place. The star was lying in a van Volkswagen,  he was resting while watching, hilarious, a dozen friends and members of his family celebrate the concert by dancing on his music, broadcast from the van. Then the giant with the fragile foot has granted interviews drip, a cone planted between his grillz, jewellery covering teeth, usually worn by rappers.

When asked about his ascent, Damini Ogulu (his real name) confides, moved: “I owe everything to my mother, she was my first influence and she continues to accompany me for the tours.” His sister Nissi, singer and guitarist, who is just starting to talk about him, was also by his side that day. But it is especially his grandfather, Benson Idonije, who allowed him to acquire an artistic maturity.

A respected music critic, an interviewer with Radio Nigeria 2 (now Metro FM), this 83-year-old music lover remains above all Fela Kuti’s first manager, helping to form the pioneering group of Afro-beat. “Thanks to my grandfather, who received all types of records, I was exposed to many things. There was Fela, of course, who is a hero for me, but my family gave me many other references … ”

To support these words, just look to his mother, also his manager, Bose Ogulu … who wriggles with the friends of the singer near the van. This leading woman expresses herself in perfect French. “I went to high school in Abidjan … and I organized summer camps in Biarritz,” smiles this graduate interpreter who masters most of the major European languages.

“My son was obviously inspired by what we were listening to at home in Port-Harcourt: Manu Dibango, Papa Wemba, Kassav, Anita Baker … I ran a music school where he learned to play the keyboard from 7 years old. And when he followed me to Biarritz, he was also imbued with the music of surfers, more rock. But later, he built it all by himself, especially when he went to London to study. He has absorbed all genres to create his own style. ”

The sound of Burna Boy, who often sings in Yoruba, agrees with African tempos as the standards of globalized pop. He may as well share the microphone with British star Lily Allen, keeping a very dancehall flow (for “Heaven’s Gate”), than Sampler Angélique Kidjo (“Wombolombo Something”).

And the continent is at the heart of his concerns: he has also given most of his last concerts in English-speaking Africa. “We had a scheduled show in Abidjan, but it was falling on the day of the BET Awards … We’ll be back! His mother promises.

“The artist is fighting for African pride. he recently won against the organizers of the Coachella festival in California”

Burna Boy advocates for African pride. He recently defeated the organizers of the Coachella festival in California, who had written his name too small on the poster: “I am an African giant and I will not be reduced to the small size of this writing.”

“It’s not a question of ego,” says Ogulu. My son wanted to point out that Africa is full of artists, athletes and excellent scientists who are not lucky enough to be highlighted just because their continent is not in a strong position. Fortunately, things are starting to change. ” 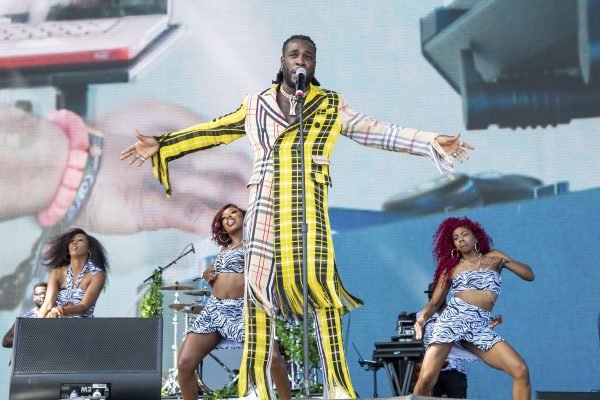 Burna Boy during her performance at the Coachella Music Festival in April 2018. © Amy Harris / AP / SIPA

The apparently light-hearted hits of Burna Boy sometimes rely on very political texts, which evoke the lack of water, electricity, food; police repression for “those who talk too much”; or the galleys of youth, as in his title Ye, released last year. “It serves you a dish of suffering, but the dish is well presented,” laughs his mother, who describes his offspring as a star above all “pan-African“.

But the young man, often overtaken by his bubbling temper, struggles to carve the moral stature of a Fela. During a recent concert in Lusaka, Zambia, he gave a violent kick to a spectator (whom he later accused of wanting to rob him), treated Kenyans as “peasants” on social networks after have been criticized for a show, said on Twitter hating pastors and priests (“I should smash one, someday, I know God would be happy”) …

In short, Burna Boy seems in fact torn between his artistic family heritage, militant, and temptations more bling-bling own his generation. An ambivalence that also reflects the amazing necklace he wore that day, with a medallion encrusted with diamonds representing Fela, arms raised. A coquetry bought 20 million nairas … more than 49 000 euros.

At only 28 years old, Burna Boy has managed to create his own style, “Afrofusion”, a vividly groovy mix of influences. Hypnotic keyboard, thunderous sax, the arrangements of his second studio album, African Giant, return very consciously to Fela …

The young man even addressing social issues, such as unemployment (on the single “Dangote”), which is not common among the new generation Nigerian. The use of Gbedu, a large percussion instrument used during Yoruba ceremonies, on a title like “Gbona”, further underlines its African DNA.

But the artist embroidered on this legacy, adding flow dancehall, R’n’B melodies or rock gimmicks to his explosive cocktail. And the “African giant” is finally very cosmopolitan … which will ensure, we take the bet, an international success.