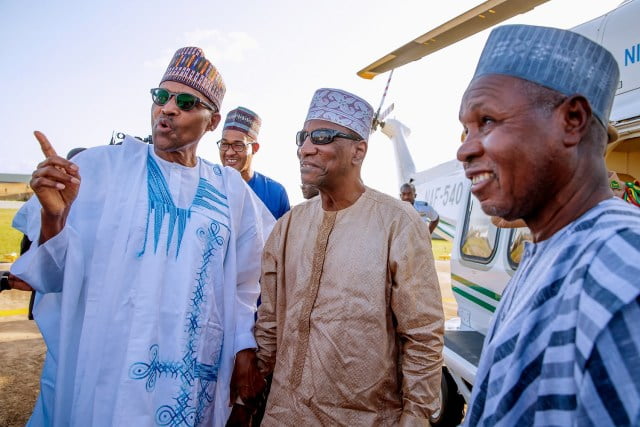 Fresh facts have emerged alluding to the fact that part of President Alpha Conde of Guinea’s mission in Nigeria is to lobby for Chief Bola Tinubu to replace President Muhammadu Buhari in 2023.

Recall Conde arrived in Daura, Katsina State, at the weekend to visit Buhari as the two African leaders celebrate the 2019 Eid-El-Kabir.

However, some reports have linked the visit to an attempt to convince President Buhari to allow Tinubu who is the National Leader of the ruling All Progressives Congress (APC) to get the party’s ticket for the presidency in 2023.

“Yes, the Guinean president is in Daura to celebrate the Eid-el-Kabir festive occasion with President Buhari but it is a strategic visit as he wants to use the occasion to lobby for his friend, Asiwaju Bola Tinubu,” a source told Daily Independent.

“He decided to meet President Buhari in Daura when the president is on break because it will afford them to have a heart-to-heart talk compared to the tight schedule at the Villa.

“We all know the role Tinubu played in his reelection, so I think Condé believes that one good turn deserves another and this explains why he has come all the way from Guinea to intervene on Tinubu’s behalf.”

However, as earlier reported by Naija News, President Buhari had disclosed that he won’t interfere in the choice of who emerges as his successor after his tenure ends in 2023, noting that Nigerians deserve to willingly choose who will be their leader.

Similarly, Tinubu himself had back in July 2019, distanced himself from a group ‘campaigning’ for his 2023 presidential bid.

The former Lagos State governor also denied reports he is running for the highest political office in the country in 2023.