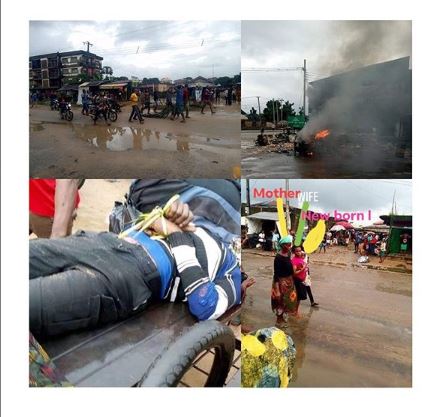 Youths of Umuokereke Ngwa community in the Obingwa Local Government Area (LGA) of Abia state have taken to the streets of the state to protest the murder of a commercial driver by a Soldier.

Naija News understands that the youths took to the streets, armed with placards of various inscriptions and calling for the investigation and prosecution of the Soldier over the inhumane act.

The protesters alleged that the Nigerian Soldier gunned down the driver over a bribe of N100.

It was reported that the Nigerian Soldier had stopped the driver who is said to be an operator of a tricycle in the area and demanded for an N100 tip which the tricycle rider blatantly refused.

The Soldier who was apparently displeased with the action of the Tricycle rider allegedly cocked his gun and had some bullets discharged against the rider while he died quietly.

Although the allegation is still yet to be confirmed by Naija News, the protesters alleged that the deceased just welcomed a child with his wife.