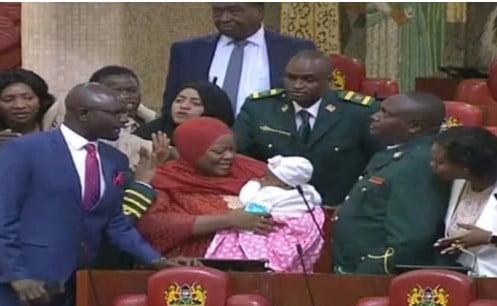 A Kenyan lawmaker, Zulekha Hassan has been sent away from her legislative duties after she allegedly walked into the debating chamber with her five-month-old baby.

The legislative business was temporarily disrupted as House Majority Leader Aden Duale had to pause a motion he was moving on the Kenya-Somalia maritime dispute.

Speaker of the National Assembly Hon. Chris Omulele, MP Luanda who termed the move as unprecedented, angrily demanded an explanation on how Hassan was allowed into the Chamber with the baby.

Zulekha Hassan, in her defence, said she had an emergency that’s why she came to parliament with the baby.

“This is my third child. I have never done this but it is only because today is was an emergency and I had no other way and I thought why should I miss work, because it’s like I have been punished for having a child and it’s a very natural process,” said Hassan reveals

Samuel Atandi, MP for Alego Usonga who supported the nursing mother/legislator was later ejected from the proceedings for being disorderly when he tried to defend and protect her.

The Female legislators in support of the ejected lawmaker also walked out of the Chamber as a sign of solidarity with Hassan, condemned the Speaker and their male colleagues on how the matter was handled.

She later issued a statement with other female legislators, saying “It is important for them to know that if they don’t do it, we are going to ask all women with children in the house to bring here to this House so that the House Leadership can get the message.”

The incident comes a week after the world marked the Breastfeeding Day, with calls to have mothers allowed to breastfeed anywhere.