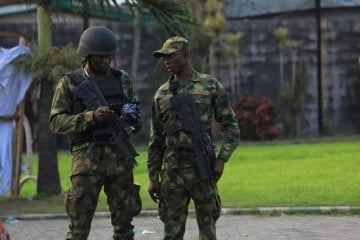 The nationwide Revolution Now protest slated for Monday failed in Ondo State as business and social activities continued throughout the state.

Naija News understands that Security forces and agencies deployed their men to strategic areas of Akure metropolis in anticipation of the protest that refused to hold.

Officers of the Nigeria Security and Civil Defence Corps (NSCDC) and some plain cloth men were sighted on the road leading to the area of the M.K.O Abiola Democracy Park, close to the main market, Oja Oba.

The Police spokesman in the state Femi Joseph, said the state Commissioner of Police, Undie Adie has ordered their men across the state to be on red alert.

“It is the right of every individual citizen to protest, but the manner and the lexicon they(organisers) are using ‘revolution’ depicts forceful takeover of a legitimate government in power. No security agencies would allow that to any groups to attempt to overthrow the government. Forceful takeover is no longer fashionable all over the world. No country would allow that.

“The only means of change now is through the ballot. That’s why the proposed protest was condemned by many Nigerians. That’s why we are going to resist any vestiges of revolution.

“We are on ground and ready. We are not leaving anything to chance because Sowore is from this state and surely he would have some of his supporters here. We would not allow that in our state.

“This is not acceptable. It is tantamount to treason and we all know the consequences. They should dissipate their energy on better things. They should not make any attempt in Ondo State because we will deal with them decisively though within the ambit of the law.”