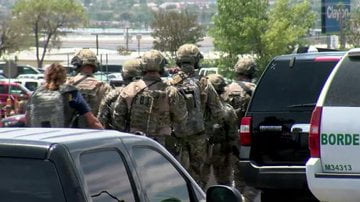 Many people were on Saturday killed in a shooting at a Walmart store in Cielo Vista Mall in El Paso Texas, just a few miles from the US-Mexico border.

Naija News gathered that at least 22 people have arrived at local hospitals for treatment for their injuries.

It was the second fatal shooting in less than a week at a Walmart store in the US and comes after a mass shooting in California last weekend.

One person is in custody, and police did not believe there were multiple gunmen, a spokesperson said, but was unable to provide casualty figures.

“We don’t want to do anything prematurely until we have accurate facts for you,” Sergeant Robert Gomez said, declining to provide details on the injured.

There were reports of gunfire in several locations – in both the Cielo Vista Mall and the nearby Walmart, police said – but reports of further gunshots at another nearby mall, Bassett, were not true.

“Initial reports of the weapon was a rifle – I can’t confirm that yet,” the spokesman said.

He could not confirm any details about the suspect, except that he was male. No officers had fired their weapons in apprehending him, he said.

Police said they no longer believed there was an immediate threat to the public, but were continuing searches.

A family reunification area had been set up nearby for those searching for loved ones.

Speaking to Fox News, Dan Patrick, the lieutenant governor of Texas, confirmed that there had been up to 20 casualties in the shooting.

“We have between 15 and 20 casualties, we don’t know the number of fatalities,” Patrick said.

El Paso Mayor Dee Margo also confirmed that there had been a number of deaths after gunfire was first heard around 10 am.

“I can’t confirm the number of fatalities. But there are fatalities,” he told CNN.

Multiple people have died in a mass shooting at a El Paso Walmart. Thank God for this hero Army Specialist Glendon Oakley who saved many kids at The El Paso Walmart shooting. Sending Prayers ?? to the victims and their families. Action needs to be taken in this Nation. pic.twitter.com/i1Obba3bNW