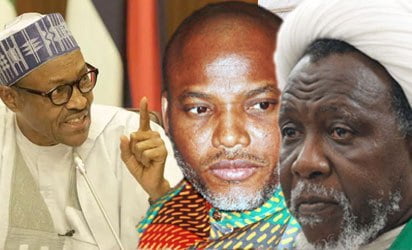 A full audio broadcast of the leader of the Indigenous People of Biafra (IPOB), Nnamdi Kanu, berating the banning of the Islamic Movement Organisation (IMN) better known as Shiites, has emerged.

Naija News had reported earlier that the Federal Government obtained a court order to proscribe the Shiites as a terrorist group, just like it did with Nnamdi Kanu’s led IPOB.

The ex parte application marked FHC/ABJ/CS/876/2019 was filed in the name of the “Attorney-General of the Federation” before the court on Thursday, July 25.

This online news platform understands that the court restrained “any person or group of persons” from participating in any form of activities involving or concerning the IMN “under any name or platform” in Nigeria.

Reacting to the development in a live broadcast over the weekend, Kanu called for the immediate release of Shiites leader, Ibrahim El-zakzaky, noting that the banning of Shiites “cannot hold water.”

Kanu stressed that the IPOB is supporting Shiites because “Biafrans have a soul” and cannot support injustice.

His words as captured by Naija News reads as thus: “We are Biafrans, we have a soul. We reject injustice. You cannot regard yourself as a human being if you support injustice.

“El-Zakzaky must be released. The tagging of the Shi’a group as a terrorist cannot hold water.

“What is the difference between the judgment that the other high court gave about El-zakzaky’s freedom and the one banning Shiites?

“The Shi’a group have done nothing wrong. They must be freedom in Africa. I mean total freedom. You cannot determine who you give freedom of association to.

“You must obey court orders even if you don’t like it. The constitution of the zoo allows freedom of religion.

“What did El-zakzaky do? What did the Shiites group do to be tagged a terrorist group?

“Shi’a or Shiites group is not a terrorist group and it can never be,” the apparently furious IPOB leader added.

Below is the full audio…