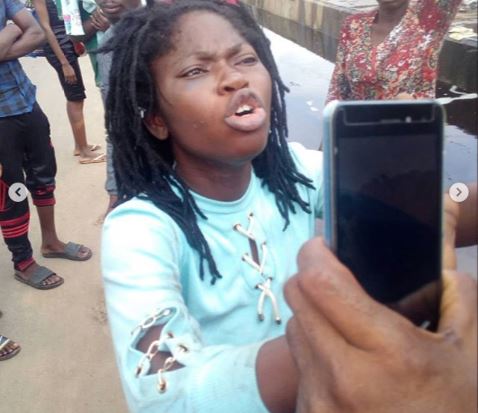 A middle-aged woman was on Wednesday, caught at the scene where she was about disposing her infant child inside a drainage system in Lagos.

The action of the yet-to-be-identified but middle-aged woman left the people in the area wondering what could have been the cause of her inhuman action.

This online news platform understands that the action of the woman might not be unconnected to her story of not being able to cater for the need of her child.

Although the sex of the child was not discovered as at the time of this report, Naija News understands that the baby who almost got disposed by her mother is less than a four-months-old.

The woman and her child had since been taken to the Ile Epo police station in the Iyana-Ipajja area of the state.

Wale Ilebiyin an eyewitness who shared the report via his Instagram handle captioned his report, accompanied with the photos of both the mother and child as thus; “The baby here was about to be thrown inside a gully by her own mother (swipe to see the mother) in front of my office at Ile Epo bus stop, after Iyana Ipaja, along the expressway, this morning at exactly 10:30, before she was apprehended and taken to Ile Epo police station.”