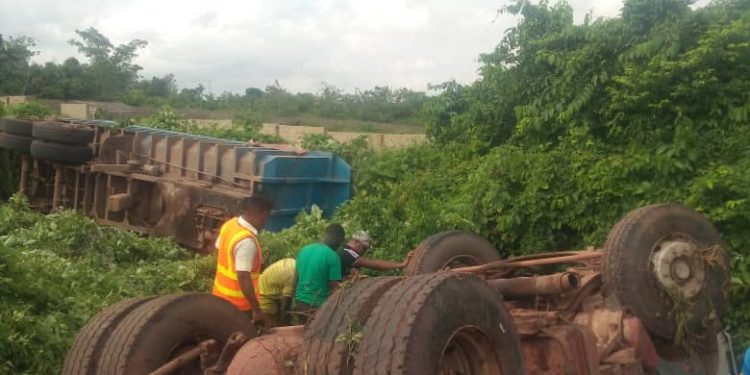 Three persons have been confirmed dead while two others have sustained various degrees of injuries after a truck accident along the Lagos-Abeokuta expressway.

Naija News understands that the accident occurred during the late hours of Tuesday at the Akinale village corridor of the Lagos – Abeokuta expressway.

The driver of the truck was said to have died almost immediately after the crash.

Naija News understands that the accident occurred when the head of a truck marked AAA 912 XK, conveying them detached from its body while in motion and tumbled many times over before it rested on a side of the road.

It was learnt that the dead were trapped in the mangled head of the truck while two other persons also sustained grave injuries in the process.

Operatives of the Federal Road Safety Corps (FRSC), the Ogun State Traffic Compliance and Enforcement Corps (TRACE) and Nigeria Security and Civil Defence Corps(NSCDC) were sighted working to evacuate the survivors and the dead, a source told The Nation.

While confirming the accident, the Public Relations Officer of Trace, Babatunde Akinbiyi, said it was a lone accident that occurred when the head of a truck came off.

Akinbiyi stated: “We learnt it was a lone accident. The trailer driver was on top speed when suddenly the driver lost control and the body (trailer) detached from the head as a result of not being properly hooked and veered into the bush.

“Among the three confirmed dead, was also the driver of the trailer.”