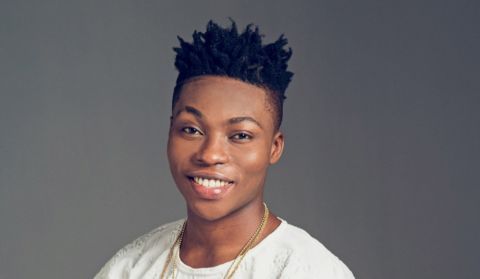 Former Mavin Records label singer, Reekado Banks, got more than he bargained for while recently featuring on a live TV interview programme.

The Nigerian singer and the presenters were shocked when a lady called in on the show and accused Reekado Banks of abandoning her after sleeping with her.

The obviously bewildered presenters after the call had been disconnected, mumbled that the lady called a wrong number.

Naija News, however, understands the happening could have been a prank set up by the producers of the show for the music star.

You guys need to see this of Reekado Banks ???pic.twitter.com/gvyNYwK3L3

And see how Nigerians have been reacting on Twitter.

Reekado Banks after the interview trying to remember which of his girls called ???? pic.twitter.com/xbBZPJfHNn

Reekado banks trying to remember all the babes on his roster that can do this to him pic.twitter.com/jVltMbwm7q

Mayb he told her dat he owns a bank..
Reekado Bank of Africa pic.twitter.com/JqoaT2nOAX

Ha! that girl did Reekado Banks dirty ???.
Uncle must have really promised her heaven and earth before she finally let him taste the cookie, cause she sounded soo pained

So one of d lady dt interview Reekado bank in dt Video said it was a prank ????? I laff really hard…..Kontinu pic.twitter.com/IYJmgwMMUu

It is truly a problem when a media platform begins to pursue shock value at the expense of an artistes’ image.

So that was a prank call on a tv show, it was funny then , but I do not like where this is headed!