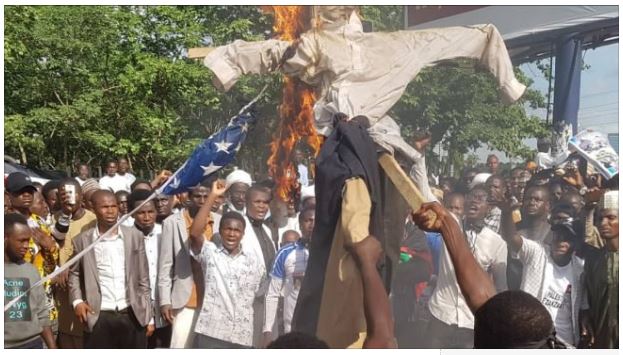 Members of the Islamic Movement of Nigeria (IMN) also known as ‘Shiites‘ have disclosed they will embark on another massive protest today (Wednesday) over the release of their leader Ibrahim El-Zakzaky.

Naija News recalled that Shiite members had on Tuesday allegedly shot two security operatives dead during a protest at the National Assembly in Abuja, Nigeria’s capital.

It was gathered that the protesters shot their victims dead at the National Assembly complex in the Nigeria’s capital territory.

The incident was reported to have led to the closure of all gates to the National Assembly premises.

However, another report stated that two Shiites were killed while five policemen were injured and 50 cars vandalized.

According to SaharaReporters, the Shiites have perfected plans to regroup and storm the Federal Capital Territory.

The Secretary of the Academic Forum of the movement, Abdullahi Musa said the movement would not be deterred by the killing of two of its members.

“We are coming out tomorrow (today). The only thing that will stop us from coming out is when they free our leader and allow him to go for medical treatment,” Musa said

He stated that IMN had submitted a petition and medical reports to the leadership of the National Assembly on the need for their leader to seek medical attention because of his deteriorating health condition.

He said, “All the documents were duly submitted to the appropriate authority but they are yet to take action on it after 128 hours. No response from them that is why we went back to see them but the police started shooting teargas at us on the arrival at the gate.

“They used live ammunition and killed two of us and during the shooting, they shot some of their officers.”