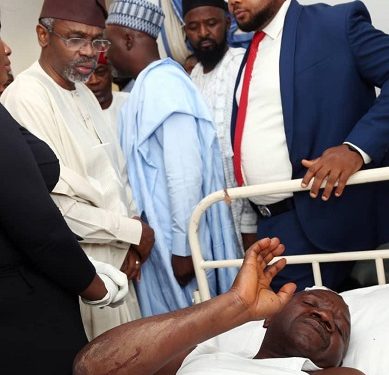 The FCT Police Command has arrested over forty (40) members of the Islamic Movement of Nigeria (IMN) in connection with the violent protest.

The group which started its activity, camouflaged in a peaceful procession became violent and were trying to force their way into the National Assembly. Police operatives on the ground, however, acted proactively, professionally and used minimum force to disperse the unruly protesters.

Members of the sect during the violent protest shot two (2) police personnel on the leg, while clubs and stones were used to inflict injuries on six other policemen. The injured policemen have been taken to the hospital for prompt medical attention.

Meanwhile, Speaker of the House of Representatives, Femi gbajabiamila has visited policemen who got injured when members of the unleash terror and troubles on policemen.

Here is a picture of the speaker at the hospital

The Nigerian Police Command has, however, wishes to state unequivocally that while it recognizes and respects the right of citizens to peaceful procession, an attempt by any individual or group of persons to cause the breakdown of law and order will not be tolerated. Those arrested in the process will be dealt with in accordance with the appropriate law of the land.

Members of the public are enjoined to go on with their lawful activities as normalcy has been restored, and adequate security measures have been emplaced by the Command to forestall any security breach.