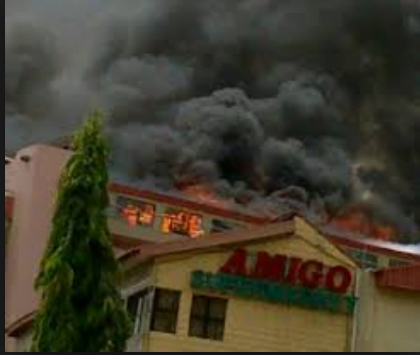 An Inferno on Tuesday gutted a popular supermarket in Abuja, ‘Amigo.’

Naija News reports that the famous and well sought after supermarket also known as ‘4U,’ located in Wuse 2, Abuja, was attacked by the inferno at around 1:30pm, Tuesday afternoon, destroyed goods in the supermarket but was eventually put out by firefighters at 7:30pm.

While confirming the report, the Public Relations Officer (PRO), Federal Capital Territory (FCT) Fire Service, Jerry Timvh, said that the fire outbreak affected only the warehouse section of the store.

Timvh in his statement said that the cause of the inferno is still yet to be ascertained, but stressed that investigation was already ongoing to trace the source of the inferno.

“The fire incident led to the loss of many goods in the store but an exact estimate of how much is yet to be revealed.

“The fire did not affect the main supermarket as it was controlled to reduce wild spread.

“There was no casualty as shoppers and staff of the store were able to evacuate the store immediately the fire started,” he said.