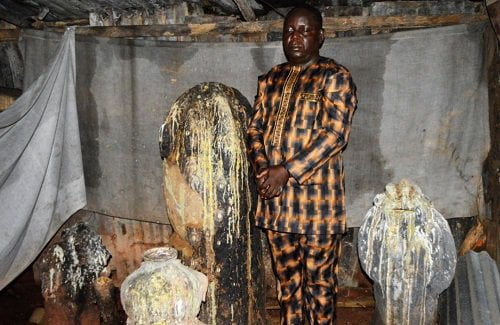 Naija News understands that the fake native doctor is a specialist in duping his unsuspecting patronizers under the guise of possessing spiritual powers to solve their problems.

Aliu was arrested by the operatives of the Commission during a planned raid of his abode at Kisumu Estate at Odo-Ona Elewe area of Ibadan, the Oyo State capital.

He was arrested after series of intelligence reports linking the native doctor to a series of fraud allegation involving huge amounts of money.

The Nigeria’s anti-graft agency revealed that Aliu was accused of engaging in fraudulent money doubling through which he collects money from his victims with the hope of multiplying the monies for them, but instead, he diverts the money amounting to millions for his personal use.

The raid led EFCC operatives to his shrines located in a thick forest around the Ibadan-Ijebu-Ode Expressway and Kobomoje area of the town where frightening voodoo items were sighted.

Items recovered from the fake herbalist include three exotic cars – two Toyota Corolla and Honda Pilot; vehicles that even some of his victims couldn’t afford.

Naija News understands that the suspect is also in possession of three luxurious buildings within Ibadan and land documents which were also recovered as exhibits.

The suspect as at the time of this report, is currently undergoing interrogation at the commission’s zonal office in Ibadan.