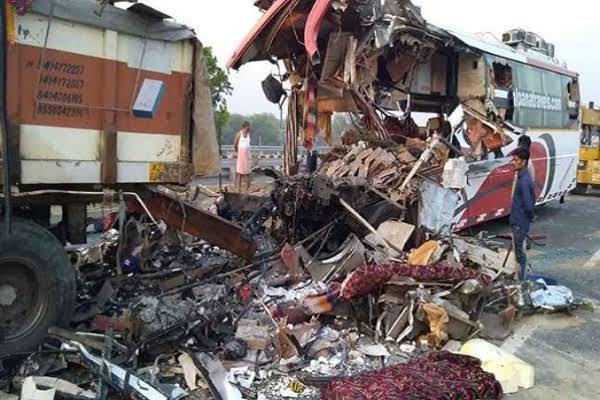 At least five (5) persons have been confirmed dead, while over forty (40) others have been left with various degrees of injuries after a passenger bus rammed into a stationary truck in the northern Indian state of Uttar Pradesh.

Naija News understands that the accident occurred on the Agra-Lucknow Expressway in Fatehabad of Agra district, about 297 kilometres west of Lucknow, the capital city of Uttar Pradesh.

“This morning, five people including a child were killed and over 40 others injured after a double-decker bus plying on Agra-Lucknow Expressway rammed into a sand-laden truck,” a police official posted in Agra, told Xinhua.

The Police said that the bus was coming from Bihar and heading to Jaipur in Rajasthan when the accident occurred.

Those who were injured during the incident have since been rushed to a nearby hospital where they are currently responding to treatment.

While reacting to the accident, Uttar Pradesh, Chief Minister Yogi Adityanath has expressed grief over the loss of lives in the accident.

“Yogi Adityanath expressed deep condolences over the death of five persons in a road accident in Agra and directed the administration to provide all possible medical assistance to the injured,” a statement issued by Uttar Pradesh Chief Minister’s office said.

Police have registered the case and ordered an investigation into the accident so as to ascertain the cause of the crash.