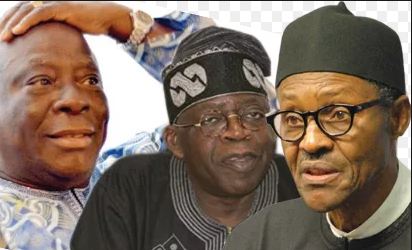 Naija News reports that the elder statesman made this comment during an interview with Daily Independent, where he stressed that President Buhari will not hand over power to Tinubu in 2023 because the President has already gotten what he wanted from the former Lagos state governor.

His words: “They only go to Buhari whenever they want to deceive him. They have been deceiving Buhari and Buhari too is also deceiving them,” he said in reference to Afenifere’s recent visit to the President.

“What he wanted from Buhari, Buhari won’t give him. Buhari too is deceiving them because he knows they are fake.

“Their visit is an attempt to persuade Buhari that they are for him so that he can give them the slot for the presidency in 2023.

“But Buhari is not going to give them. He only needs them for support during elections.

“Tinubu knows that. They have used him before. Didn’t they use him before the election in 2015 only to abandon him later? It was when the 2019 election was approaching that they remembered him again.”

In a development, the elder statesman says the more President Buhari and his party, the APC, “hesitate to create true federalism immediately“, the more they will go down as “destroyers of Nigeria.”