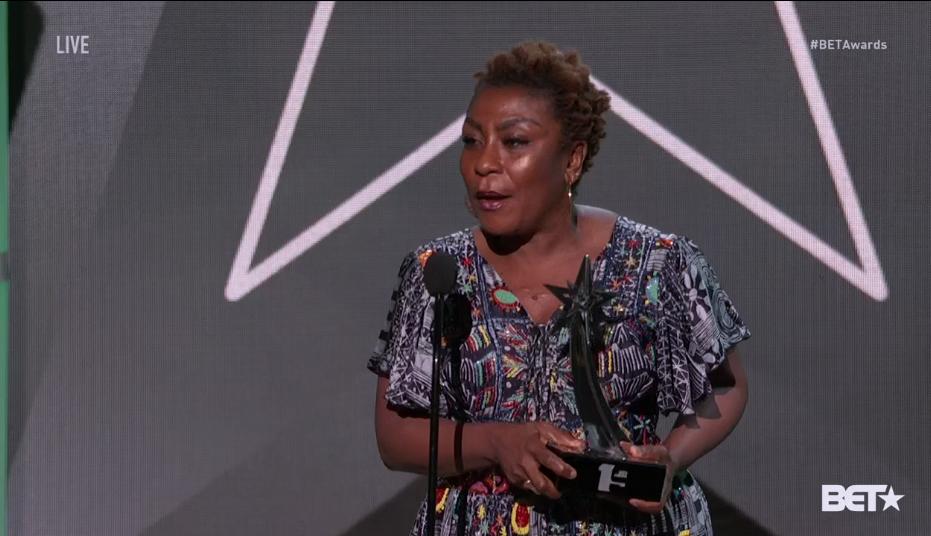 A storm of reactions by Nigerians has greeted the speech delivered by Bose Ogulu, the mother of Nigerian Afrofusion singer and songwriter, Damini Ogulu, better known by his stage name Burna Boy, at the BET Awards.

Naija News reports that the 2019 BET Awards took place at the Microsoft Theatre in Los Angeles, United States of America (USA) on Sunday, June 23 with Burna Boy emerging as the “Best International Act”.

Speaking while receiving the awards on behalf of her son, Mama Burna reminded the audience of their historical background.

Mama Burna stressed in her speech that every black person must remember that they were Africans before anything else.

“Every black person must remember that you were Africans before anything else,” Mama Burna said.

Moments after Mama Burna delivered a “powerful speech” at the BET Awards, Nigerians took to the micro-blogging site, Twitter, to praise Mama Burna.

Naija News captured some reactions below…

I was wondering where burna got it all from
Give it up for mama burna!??pic.twitter.com/ZbhtUAOcza

Mama Burna is a mood. An attitude. A way of life. Glory!!!

Finally, they're presenting awards to Africans on the main stage and Mama Burna used that opportunity to shatter the table. #BETAwards #BETAwards2019 #BurnaBoy #MamaBurna pic.twitter.com/IRK8dNH0Ak

I learnt my lessons: always good to stay behind and backup. Remember you were Africans before you became something else, mama burna. Congrats African Giant Burna Boy #BETAwards pic.twitter.com/1d3bEwbR0G

I still don't get the hype in what mama Burna said. It's just basic. pic.twitter.com/1SNdqPcqNe

“You were Africans before you became anything else.” – Mama Burna

This is the shortest, most powerful speech I've heard.#MondayMotivation pic.twitter.com/4qSCyh5QdP

But, only Mama Burna prepares the right type of Stew ? for her son Burna Boy @burnaboy the African Giant, and she welcomes Everyone to join in it's called the "African Stew" you might lose your Tongue to it ?

Now I see why Mama Burna is trending ????????#BETAwards pic.twitter.com/QLrnh9Qnzk

On behalf of Africa and BET
We present mama burna this award of legendary speech #BETAwards pic.twitter.com/Da3tuFlsHI