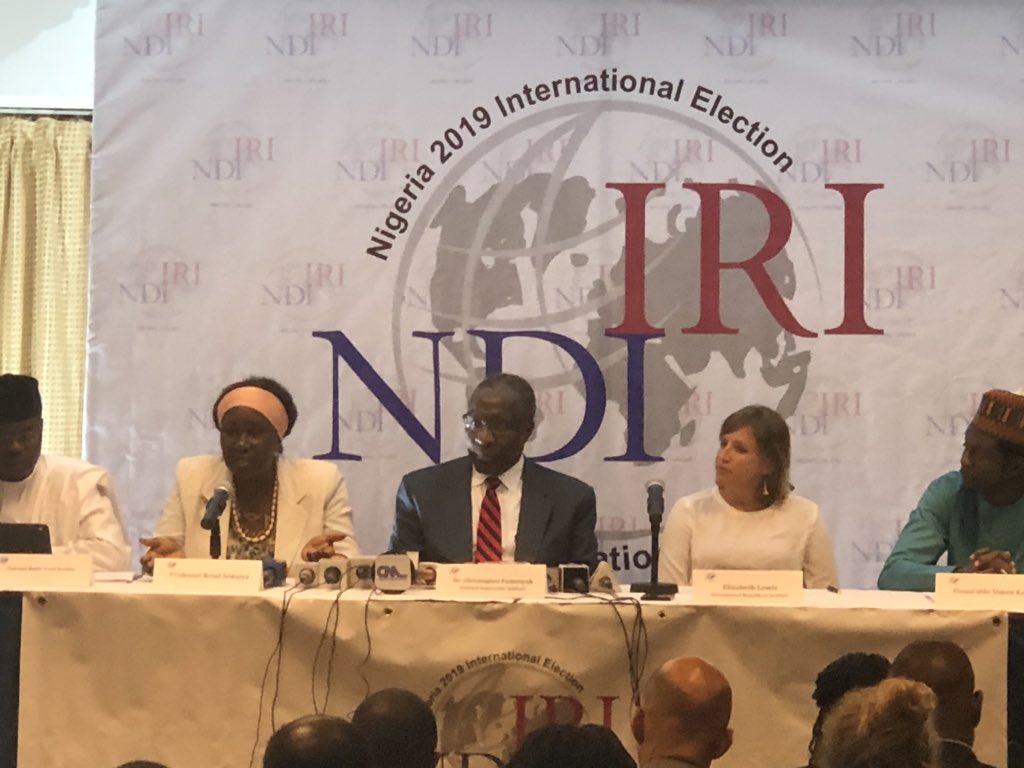 A storm of mixed reactions by Nigerians has greeted a report of the joint Nigeria International Election Observation Mission of the National Democratic Institute (NDI) and the International Republican Institute (IRI), that Nigeria’s 2019 general elections “fell significantly” short of the standards set in 2015.

Naija News reports that the IRI/NDI made this known in its final report on Nigeria’s 2019 general elections which was released on Tuesday in Abuja, Nigeria’s capital.

This online news platform understands that the IRI/NDI report builds on the findings and recommendations of three pre-election assessment missions in July 2018, September 2018, and December 2018 as well as preliminary statements released following the February 23, 2019 presidential and National Assembly elections and the March 9, 2019 gubernatorial and state House of Assembly elections.

The NDI/IRI observation mission said it conducted its activities in accordance with Nigerian law and the Declaration of Principles for International Election Observation.

It concluded that the 2019 elections did not meet the expectations of many Nigerians.

The IRI/NDI mission said the last-minute postponement of the presidential and National Assembly elections on the morning of February 16 and delays in opening some polling units and other administrative challenges on February 23 undermined public confidence in the Independent National Electoral Commission (INEC).

The report said four years ago, Nigeria held elections that were recognized internationally as free, fair and credible four years ago (which was the 2015 general elections).

According to the report, “The 2019 general elections fell significantly short of standards set in 2015. Citizens’ confidence in elections was shaken,” said Dr. Daniel Twining, IRI President. “Election stakeholders should take concrete steps to address the concerns of citizens with regards to the polls in order to rekindle their faith in the power and possibility of credible elections.”

“The 2019 elections highlighted for many Nigerians the need for a national conversation about the country’s democratization since the 1999 transition to civilian rule,” said Ambassador Derek Mitchell, NDI President. “We hope this report may both spur and contribute to enriching that national conversation.”

Moments after the report was presented by the United States of America based institutions, Nigerians took to the micro-blogging site, Twitter, to air their opinions on the report.

Both EU ?? and IRI/NDI have a very similar submission on the 2019 general elections. Aside form the notable impact of the postponement, they successfully compared the deliverables of INEC on Feb. 23 to March 9 elections.

If the EU report on the 2019 election was ambiguous for you to understand, then this is the NDI/IRI for you all to read. The 2019 election fell short of every sane standard, riddled with voter intimidation, vote buying and inducement, violence and madness. #stolenmandate #Nigeria pic.twitter.com/x6XfXTiCSq

At the IRI/NDI Nigeria International Election Observation Final Report/Press briefing, there was no mention of an INEC server. Apart from a few glitches here and there they overall did not dispute the final results of the 2019 presidential election. pic.twitter.com/9gcbk3pOWM

@NDI today released its final report on the #NigeriaDecides2019 elections .

Whilst many haven’t read it , they are already casting aspersions on @inecnigeria . See link attacked here to read the report https://t.co/x68OAVWST9

News Flash: There is no "INEC election result server". Just in case you missed it.

Tell them the truth, they will give it another coloration.
These guys are something else

For his mortal errors, you may not like @GEJonathan. But unarguably, he's got many good sides as a leader, one of which is: improving the electoral system from the angle of merit, competence, innovation, legislation, non-interference & acceptance of outcome