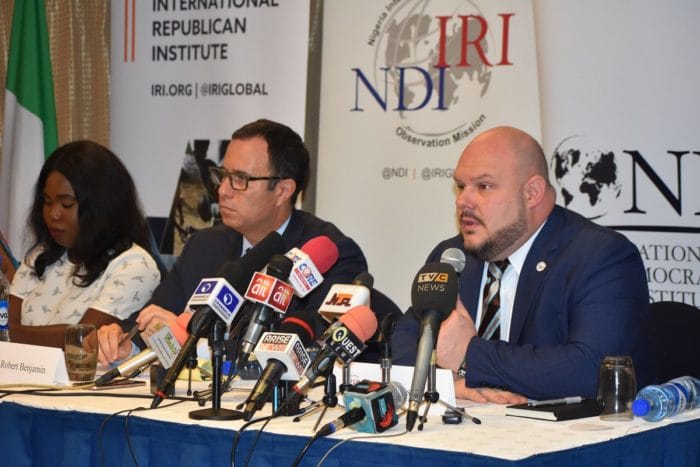 Naija News reports that the IRI/NDI made this known in its final report on Nigeria’s 2019 general elections which was released on Tuesday in Abuja, Nigeria’s capital.

This online news platform understands that the IRI/NDI report builds on the findings and recommendations of three pre-election assessment missions in July 2018, September 2018, and December 2018 as well as preliminary statements released following the February 23, 2019 presidential and National Assembly elections and the March 9, 2019 gubernatorial and state House of Assembly elections.

The NDI/IRI observation mission said it conducted its activities in accordance with Nigerian law and the Declaration of Principles for International Election Observation.

It concluded that the 2019 elections did not meet the expectations of many Nigerians.

The IRI/NDI mission said the last-minute postponement of the presidential and National Assembly elections on the morning of February 16 and delays in opening some polling units and other administrative challenges on February 23 undermined public confidence in the Independent National Electoral Commission (INEC).

The report said four years ago, Nigeria held elections that were recognized internationally as free, fair and credible four years ago (which was the 2015 general elections).

According to the report, “The 2019 general elections fell significantly short of standards set in 2015. Citizens’ confidence in elections was shaken,” said Dr. Daniel Twining, IRI President. “Election stakeholders should take concrete steps to address the concerns of citizens with regards to the polls in order to rekindle their faith in the power and possibility of credible elections.”

“The 2019 elections highlighted for many Nigerians the need for a national conversation about the country’s democratization since the 1999 transition to civilian rule,” said Ambassador Derek Mitchell, NDI President. “We hope this report may both spur and contribute to enriching that national conversation.”

Going forward, the report provided recommendations to enhance the credibility of elections in Nigeria, including areas of improvement for political party conduct, civic engagement, election security, and legal frameworks around election disputes.

On the other hand, five thematic experts were also deployed to provide in-depth analysis of key issues identified during the pre-election assessments: electoral violence, election administration, inclusivity, and the political environment.

Meanwhile, the Nigerian Presidency said it welcomed the report with “reservations” but, however, rejected the groups’ criticism of the removal of the Chief Justice of Nigeria, Walter Onnoghen, ahead of the polls.