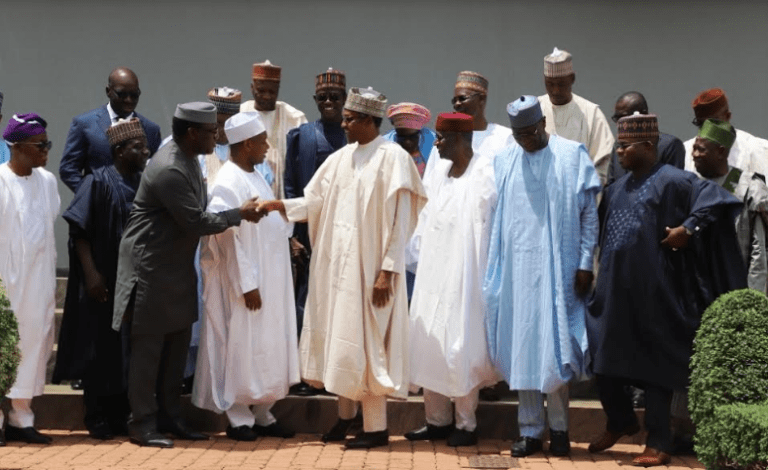 Naija News recalls that Senator Ahmed Lawan and Hon Femi Gbajamiabila both belonging to the APC emerged Senate President and Speaker of the house of representatives respectively.

Gracing the meeting are the Nigeria Governors Forum, Kayode Fayemi of Ekiti State, Governor Atiku Bagudu of Kebbi State, the Chief of Staff to the President, Mallam Abba Kyari and others.

Briefing State House Correspondents after the meeting, Chairman of the APC Governors Forum, Bagudu said that the meeting was to congratulate the President on the party’s victory at the National Assembly election of presiding officers

Bagudu also said that members used the gathering to thank the president for his various interventions to the states, especially the Paris Club refunds, the budget support fund which is in form of loan and the refund for money expended by states on federal roads.

Others at the meeting include Yahaya Bello of Kogi State, whose colleagues led by Fayemi sang birthday song for him on his 44th birthday, Godwin Obaseki of Edo, Dapo Abiodun of Ogun, Yobe, Babagana Zulum of Borno, Babajide Sanwo-Olu, Abdullahi Ganduje of Kano, Simon Lalong of Plateau, Gboyega Oyetola of Osun, Mai-Mala Buni of Yobe, Abdulrahman Abdulrazaq of Kwara and Abdullahi Sule of Nasarawa.