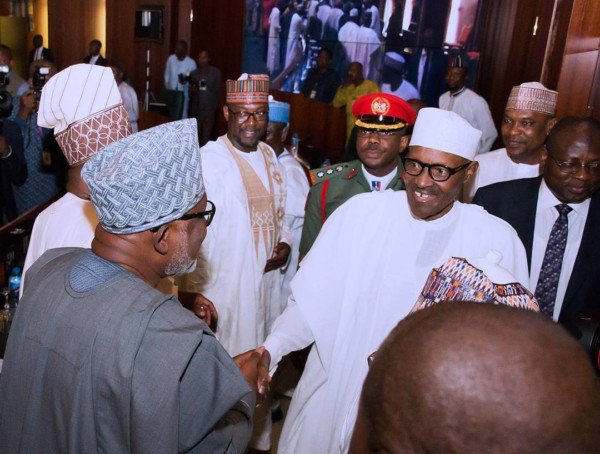 Newly elected governors under the platform of the ruling All Progressives Congress (APC) have disclosed that President Muhammadu Buhari is yet to discuss ministerial lists with them.

This is contrary to the speculation that the President was discussing the contents of his ministerial list during his closed-door meeting with the Governors in Abuja, Nigeria’s capital.

The Governors, however, stated that the matters of his cabinet were purely his decision and anybody’s to interfere.

Naija News reports that the Chairman of the APC Governors Forum and Kebbi State Governor, Atiku Bagudu, stated this while briefing the State House correspondents on the outcome of the meeting with the President.

“No. It is an executive decision,” Bagudu said while responding to a question.

“We came to congratulate him on the National Assembly elections and thank him for the confidence he had on the progressive Governors forum members who participated actively in all the processes that led to the emergence of Senator Ahmad Lawan, as Senate President, Ovie Omo-Agege as Deputy Senate President, Hon. Femi Gbajabiamila, as Speaker (House of Representatives) and Hon. Ahmed Wase as Deputy Speaker.

“Furthermore, we used the opportunity to thank Mr. President in all he has been doing and all the successes recorded in the areas which he campaigned upon and by extension our party, which are security, economy and accountability.

“We are quite happy with his support for states where close to N2 trillion was given to states in form of restructuring of loans, refunds on federal roads, refund for Paris Club, which has helped encourage economic activities in the states, payment of salaries, payment of pensions, payment of gratuities and overall investment by infrastructural spending.”