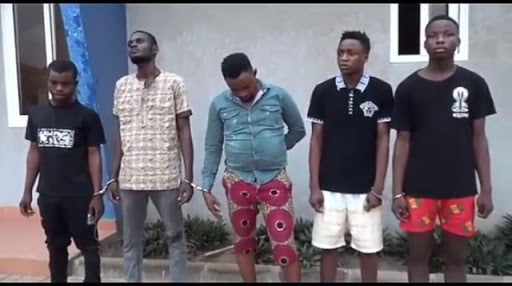 Police In Tema, a city in Accra, Ghana has arrested 5 Nigerians who robbed a Ghanaian couple and raped the lady in the presence of her boyfriend at Community 25, on the 8th of May 2019.

Chief Superintendent Cecilia Arko, Crime Officer of the Prampram Divisional Police Command, narrated that barely a month ago, four among the five suspects attacked a couple at their residence at about 3:00 am.

The suspects who allegedly targetted a mobile money vendor, mistakenly went to the house of the couple and held them hostage before demanding for money and valuables.

For the couple’s inability to provide what they demanded, Chief Superintendent Arko noted that one of the suspects angrily sent their female victim to one of the rooms where he removed her underwear and raped her while his accomplices filmed the odious act with a cell phone.

According to the Crime Officer, last Thursday, the 13th of June,2019, the couple were walking in the neighbor-hood when the rape victim spotted the suspect who removed his mask before filming the act, adding that she quickly alerted the husband who confronted the suspect on the street.

See video of the culprits who were paraded by the Police below:

In a similar story, Naija News had reported, three months ago, two Nigerian brothers were arrested, for allegedly attempting to rape a Nigerian woman in India.

"5 Nigerians have been arrested by @ghanapoliceservice for robbing and raping a Ghanaian lady in the presence of her boyfriend at Tema Community 25, on the 8th of May this year." Source: @tnghana Meanwhile some are arguing that these guys may not be Nigerians. #Ghana #Ghanapolice #Nigeria #5Nigerians #Robbers #Rapists #Crime