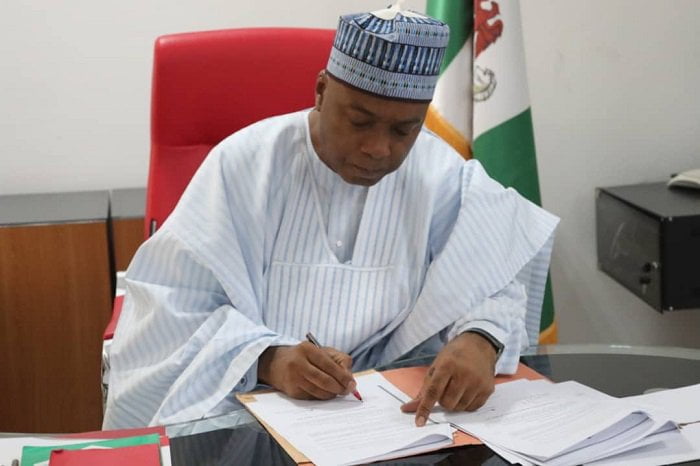 While the Nigerian Senate has moved on with its new President, Ahmed Lawan of the All Progressive Congress, the former President Bukola Saraki has also moved on, quite quietly howbeit.

The ex-lawmaker who was quick to hand over his office made his trip to  Canada, in North Americ to inhale fresh air or possibly a new life.

He wrote: Yesterday, it was a pleasure to spend some time at the Toronto Raptors training facility and meet with Masai Ujiri, the Nigerian-born President of the organisation. What a state of the art facility! Congratulations.

Yesterday, it was a pleasure to spend some time at the Toronto Raptors training facility and meet with Masai Ujiri, the Nigerian-born President of the organisation. What a state of the art facility! Congratulations. pic.twitter.com/4YTCKYBINH

Naija News understands that Masai Ujiri is a former Nigerian basketball player as well as executive. He is the president of basketball operations and former general manager of the Toronto Raptors in the National Basketball Association (NBA). After his playing career ended, he became a scout. He was named the NBA Executive of the Year in 2013 as the general manager of the Denver Nuggets.

READ ALSO  How PDP Will Rescue Nigeria From Insecurity - Saraki

He wrote: I was pleased to hear about Masai’s @GiantsOfAfrica Foundation that works to create a pathway for the continent’s underprivileged youth through sport with the goal of growing the game of basketball within Africa.

With basketball facilities in Rwanda, Kenya and other parts of the continent, I mentioned to Masai that it would be great for his @GiantsOfAfrica foundation to augment it’s basketball clinics by building similar ones in Nigeria.

Meanwhile, in earlier development, Saraki has willed part of his severance benefits as a lawmaker to the family of Leah Sharibu, the only Chibok girl left in the captivity of Boko Haram on account of her faith.