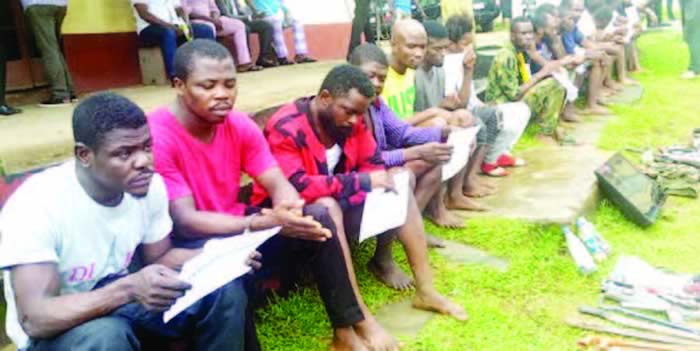 The pastor in charge of the Gate of Testimony Church, Hosanna Okoi, was on Thursday paraded by the Cross River State Police Command for allegedly raping a lady and threatening to kill her with a gun if she revealed what happened between them.

A 400-level student of Medicine and Surgery at the University of Calabar, Nnamdi Ikezue, was also paraded after he was arrested with arms and a soldier’s uniform.

A report had it that Ikezue confessed that he was a cultist and was using a locally-made pistol to protect himself.

The Commissioner of Police in the state, Austin Agbonlahor, stated that Okoi, who claimed that his church was located in Sierra Leone, was arrested after a lady reported that the pastor who was meant to pray for her allegedly raped her and threatened her with a gun not to report the incident.

Okoi, while speaking on the incident stated that he only took the lady, whom he noted was unknown to him to a wedding and later to a pub.

He stated, “I am a Nigerian, but I am the pastor of the Gate of Testimony Church based in Sierra Leone. I came to Nigeria and I met the lady, who said she was going to a wedding.”

“I did not know her from Adam, but I offered to take her there and gave her N500 to drink water. Later, we met at a pub and we drank and that was all that happened. I did not take her to anywhere and I don’t know why she decided to frame me up.”

Ikezue, on his part, said, “I am having the army uniform because I was at the Nigerian Military School, Zaria, before I got admission into the University of Calabar to study Medicine and Surgery in 2014.”

“I am a cultist and I still use the military uniform and my gun, which I acquired to protect myself.”

The CP called on parents or guardians to monitor their children, he stated that the police would do everything to ensure that the society was rid of criminals.

He stated, “We will continue to ensure that we take out criminals from the society. This command has declared zero tolerance for crime and since I came in, we have been doing everything to make sure that the state is crime-free.”

“I want parents to monitor their children and wards in order to know what they are doing at every point in time.”