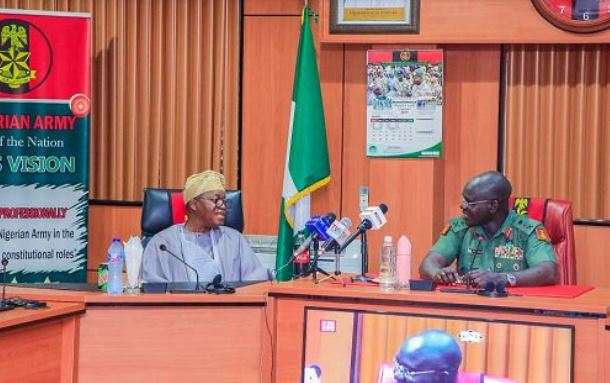 Osun state governor, Adegboyega Oyetola has paid the Chief of Army Staff, Lt.- Gen. Tukur Buratai a visit over the recent security challenges in his state among others.

Naija News understands that the Governor in his meeting with the Nigerian Army Chief, urged Buratai to speed up action on the joint security team to combat the rising security challenge.

This was contained in a statement issued in Osogbo, the Osun state capital by the Chief Press Secretary to the Governor, Adeniyi Adeshina.

In the statement by Adeshina, the governor told the Chief of Army Staff that his visit was a follow up to the letter of request sent to him to support the security efforts in the state.

In the meeting in Abuja, Nigeria’s capital the Governor commended Buratai for the efforts of the military in constructing a bridge across River Osun to connect Ede with Kuta and other communities in the state.

Oyetola in the statement also revealed that the South West governors have also resolved to organise a security summit.