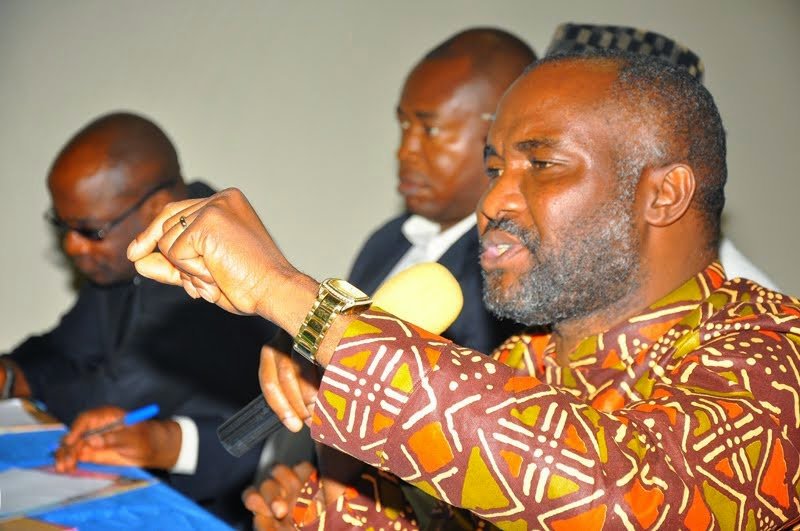 Few days after the election for the leadership of the ninth National Assembly, a Human Rights Writers Association of Nigeria, HURIWA, called for the impeachment of Senator Ovie-Omo-Agege who emerged as the Deputy Senate President after defeating Senator Ike Ekewerumadu.

The group stated that the 9th Senate would be gradually destroyed if the Senator representing the Delta State central senatorial district is not impeached.

It further stated that the National Assembly would remain a “mere political circus ring and a charade even.”

HURIWA stated this while describing the election of Senator Omo-Agege as the Deputy Senate President and Femi Gbajabiamila as Speaker of the House of Representatives as a desecration of the legislative arm of government when the duo is “yet to fully and transparently clear their names against very damaging allegations of misdemeanour and fraud.”

The Rights group in a statement through its National Coordinator, Emmanuel Onwubiko, stated that the election of the duo was a sacrilege on the parliament.

“HURIWA described their election as a desecration of the central law-making organ of government with lasting consequences on the moral justifications of the legislation to be churned out from the 9th session of the National Assembly and constitute also a grave sacrilege on the parliament because of the hovering doubts that will linger in the minds of decent persons globally about the ethical challenges that confronted the duo which were never treated or resolved to the satisfaction of the principle of rule of law.”

“We also condemn the All Progressives Congress(APC) for insisting on foisting the duo of Omo-Agege and Gbajabiamila which offends section 15 (5) of the Nigerian Constitution which states that the Nigerian State shall abolish all corrupt practices and abuse of power.”

The Rights group said it was the “peak of corruption that two persons with questions to answer which in some cases borders of alleged criminal conducts of fraud and aiding and abetting the criminal invasion of the Senate and the violent theft of the Mace the symbol of authority of the Senate just as the group said the emergence of these two persons as Deputy Senate President and Speaker of the House of Representatives smacks of irresponsibility and crass insensitivity to the opinions of millions of the Citizens.”

While pointing to the alleged role played by Omo-Agege in the theft of the Senate mace by suspected hoodlums, HURIWA stated that the credibility and integrity of the Senate have been eroded and massively damaged irretrievably unless senator Omo-Agege is impeached from the high office of Deputy Senate President.

“We invite the senators to take a good look at the preponderance of overwhelming rejection of the election of someone who disrespected the constituted authority of the 8th session of the senate when he was suspended by the leadership of the then senate in session only for him to now emerge as deputy senate president. “This is comedy taken too far and will water-down the respect the rest of the world would have on our senate. What this action conveys to Nigerian youngsters is that it pays to misbehave and disobey constituted authority. This election of both Senator Omo-Agege and the allegedly discredited lawyer Femi Gbajabiamila if allowed to remain will amount to the CANONIZATION OF RASCALITY AND MISCONDUCT”.

“It would be recalled that the National Assembly joint ad hoc committee recommended the immediate suspension of the senator representing Delta Central, Ovie Omo-Agege, for 180 legislative days over the theft of the Senate mace. The recommendation was made by the committee investigating the invasion of the Senate at the conclusion of their investigation. The committee also recommended that Senator Omo-Agege be prosecuted alongside six other suspects who allegedly accompanied him into the chamber on the day of the incident. They are to be prosecuted for treasonable felony, assault on National Assembly members of staff, conspiracy to steal and eventual theft of the Senate Mace.”

“The committee also recommends a total review of the National Assembly’s security architecture. These steps were never taken by the law enforcement agency under the direct control of President Muhammadu Buhari’s administration because Senator Omo-Agege was then positioned as the chief loyalist of the Executive at war with the then-Senate President Bukola Saraki.”

HURIWA argued that the emergence of someone with this kind of disciplinary record as Deputy Senate president has graphically depicted Nigeria as a banana republic whereby misconduct is rewarded.

The group also stated that for many years, “Gbajabiamila, has been accused of perpetrating fraud in the United States where he obtained a law degree and where he practised until his return to Nigeria to join partisan politics from the platform of the defunct Alliance for Democracy (AD).”