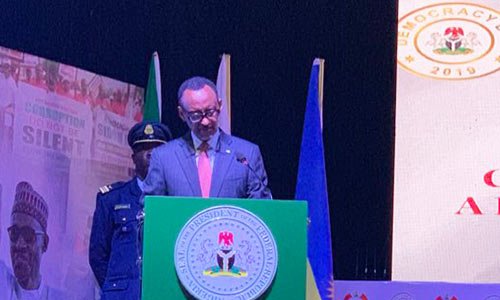 The Statement of President of Rwanda, Paul Kagame who praised Muhammadu Buhari’s anti-corruption agenda has been greeted with several reactions by Nigerians.

Naija News recalls President of Rwanda, Paul Kagame has described President Muhammadu Buhari of Nigeria as the anti-corruption champion of the African Union.

Kagame further called on all leaders to rise up and fight corruption, noting that the scourge is not peculiar to Africa.

Kagame in his words:

“This is a fight that can be won; tolerating corruption is a choice, not an inevitability. It is within our power to end it. That is the most important starting point, otherwise, it will be a waste of time to keep talking about it.

Meanwhile, here are some reactions that followed.

Kagame told Buhari two things today that were absolutely crucial about the fight against corruption:

1. Fight from the top to the bottom.

I know Buhari does not care and won't do shit. My job is to post for the world to see.

You have got to love Paul Kagame. He just schooled @MBuhari on how to be a leader. Look at what he told Buhari to his face:

'It’s not enough to fight corruption. we also have to create wealth'.

Lol.. obviously he can't comprehend that. Someone that was asked "who is Buhari?" And what we got as an answer was a foray into the "history of normadic educational system" and introduction to "coup for dummies"..

Kagame spoke to the wrong guy…. fighting from the top means starting from himself because he is deep in the act of corruption and creating wealth is impossible because he and his cronies know only how to steal

Kagame transformed Rwanda so he can talk to Buhari about development. What I don't know is how Buhari can understand his message without the help of V.P

Who is fighting corruption? When I hear some dudes say things about corruption fight by this government, I usually have nausea. ?