How Buhari Is Leading Nigeria To Disaster - Obasanjo | Naija News 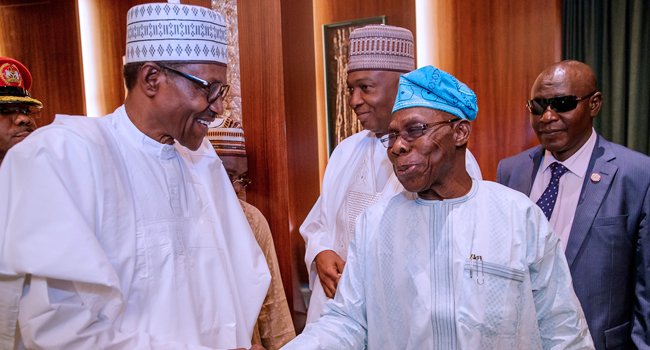 Former President Olusegun Obasanjo has accused the administration of President Muhammadu Buhari of leading Nigeria towards disaster and instability and unsustainability.

In an interview with Premium Times, the former president stated that nobody has confidence in Nigeria’s present economy.

Obasanjo also accused the Buhari government of corrupting the anti-graft agencies his government put in place.

He said: “I think we have no choice but to be on the path for sustainable development. The progress we are making may be questionable. Is it fast enough? Is it steady enough? Is it stable enough? Are we taking two steps forward and one step back or one step side-way?

“You can question that, but we have no choice but to be on (the) path for sustainable development. Any other thing will be a disaster. In fact, the pace at which we are going now is tending more and more toward disaster and instability and unsustainability.

“The problem is that we are just not doing what we should be doing. Nobody has that confidence, and we cannot develop Nigeria without that confidence in our economy. Both for domestic investors and foreign investors.”

“I set up two (anti-corruption) institutions. I came with two laws that were not there before, to fight corruption. And those who claim they are fighting corruption today have not brought in anything different.

“If anything, they have corrupted those two institutions.

“And the institutions were open and independent. I never, never, as president had to say to either the head of ICPC or EFCC: ‘Oh, chase this person’.

“Nigeria was a pariah state. Within the first four years (1999-2003)… we actually hosted the commonwealth. And Nigeria which was kicked out of the Commonwealth became the host of a Commonwealth Head of Governments Meeting (CHOGOM). We became the darling of almost all nations. The economy started doing well.

“I remember on one occasion one day or one week, Chukwuma Soludo (then governor of the Central Bank of Nigeria) phoned me and said: “Sir, in one day, we had an inflow of $80 million”. From foreign direct flow; not money from our oil export or cocoa export. Just direct! And he (Soludo) said to me: “Sir, this is almost unbelievable.