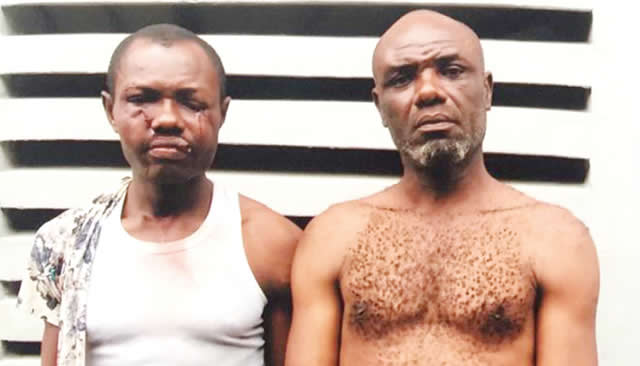 The police have revealed that a woman identified as Justina Emmanuel, who accused her husband, Joseph Agugom, and his brother Paul, of kidnapping her and her daughter, Munachisom, for ritual purposes in Lagos State, is suffering from mental illness.

It was reported that the brothers were conveying her to the hospital with her hands tied when she raised the alarm that she was being kidnapped.

People who heard the alarm were seen in a video trending online beating up Joseph and Paul and almost lynching them.

Justina while speaking had claimed that her husband is involved in money rituals, she added that he had already used two of their children for the purpose.

“He is my husband, but I don’t know that he has been engaging in money rituals. I gave birth to three children; he had taken two of our children,” she said.

The spokesperson of the Police command, Bala Elkana, in a statement on Sunday stated that investigation carried out has it that Justina was suffering from mental illness.

He further stated that she was being taken to hospital when she raised the alarm that caused the passer-by to stop the car and lynch the brothers.

Elkana who condemned jungle justice stated that the command had launched a manhunt for those who assaulted the brothers.

“On Thursday, June 6, 2019, around 12.45pm, the command’s control room received a distress call that a mob action was going on at the Lawanson junction, Itire. An anti-crime patrol team led by the Divisional Police Officer, Itire, CSP Odey Ogah, was promptly deployed in the scene.”

“One Justina Emmanuel of No. 10 Bishop Okogie Street, Ago, and her one-and-half-year-old daughter, Munachisom Agugom, were rescued. Two suspects, Joseph Agugom and Paul Agugom, were rescued from the mob. They were alleged to have kidnapped the victims for ritual purposes.”

“Members of both the suspects and victim’s families came to the station and made statements to the effect that the victim was suffering from mental illness and was actually being conveyed to the hospital. The other two children the victim had with her husband were brought to the station contrary to the allegation of the victim that they were killed by the husband for money rituals.”

“The victim was taken to hospital by the police for medical examination. The police have launched a manhunt for those who participated in the mob action with a view to bringing them to justice.”