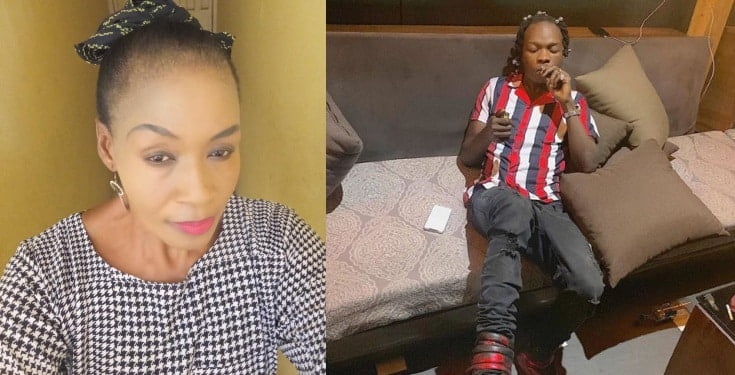 Kemi Olunloyo has again thrown her weight behind Naira Marley who was arrested on his birthday, Friday, May 10 by the operatives of the Economic and Financial Crimes Commission (EFCC).

Naija News reports that Olunloyo spoke when she reacted to reports that Naira Marley is still in detention because he is yet to meet his bail conditions; a development that online users have attributed to the inability of the Nigerian artiste to get his Level 10 Sureties to secure his release.

Olunloyo in her reaction said that she has also been through a similar situation, she said that Naira Marley’s sureties are ready and it might take weeks before authorities verify the sureties presented.

In her words, she said; “Lies! #AwonOde All the sureties are ready. Mine was level 10 too. They just need to be VERIFIED! It took 7 weeks to verify my sureties and process the bail I had to call out the Deputy court register Memunat Folami who sat on my files with every excuse. Google her name and Sahara Reporters. Same way Linda Ikeji told Punch she paid my Bail when I was “languishing” in prison. Know the facts! Bail April 10th, left June 5th.”

Olunloyo lambasted those against the release of the Nigerian artiste in her statement that further read as thus; “All of you ppl abusing @nairamarley may be NEXT. Prison will be your portion soon instead of fighting the system that’s scapegoating an innocent young man. Fake ACTIVISTS everywhere.”