A former minister of Aviation, Femi Fani-Kayode, says the General Overseer of the Deeper Christian Life Ministry, Pastor William Kumuyi, speaks the “mind of Satan and not God” for calling on Christians not to attack the president of the country through any means, in what many see as a support for President Muhammadu Buhari.

“God, deliver us from shepherds that slaughter the sheep, that defend the cruel, that support injustice, that love the wicked, that serve the tyrant, that despise the weak, that enslave the poor and that worship genocidal maniacs and sociopathic butchers.

“Fulani terrorists abducted a husband, a wife and their 9-year-old son. They raped the husband, the wife and the son after which they killed them. These are the beasts that Buhari is protecting yet Kumuyi says we should not attack him? He speaks the mind of Satan and not God!” 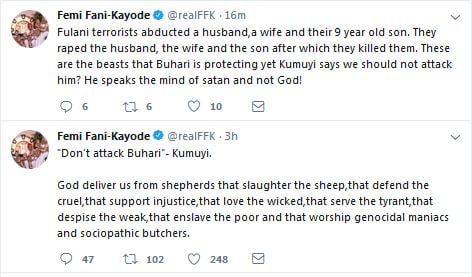 The Peoples Democratic Party (PDP) chieftain, however, went on to delete the tweet where he said the clergyman speaks the “mind of Satan and not God. “