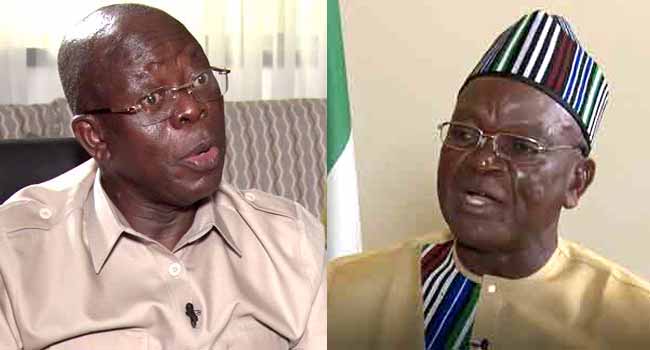 A high court sitting in Makurdi, the Benue state capital has fixed Thursday, July 11 to rule on the application brought before it by counsel to the National Chairman of the All Progressives Congress, (APC), Adams Oshiomhole in the libellous suit filed against him by Governor Samuel Ortom of Benue State.

Naija News understands that Governor Ortom had filed the suit against Oshiomhole over a press conference in which the APC National Chairman was said to have made libellous statements against the Benue Governor.

Ortom’s lawyer, Samuel Irabor, who appeared in court with two witnesses had on Friday told the court that he was ready to go on, but that he was served with a motion on notice on Thursday by the counsel to the APC National Chairman, which he has responded to.

Oshiomhole’s lawyer, Festus Jumbo, told the court that the application is praying the court to strike out the suit for failure of the governor to join the Nigerian Television Authority (NTA) and Vanguard Media Limited, publishers of the Vanguard Newspaper, and other print and social media platforms in the suit.

Responding, Irabor told the court that the case can be decided between Governor Ortom, Chairman Oshiomhole and the APC without joining the NTA, Vanguard Media and various social media platforms.