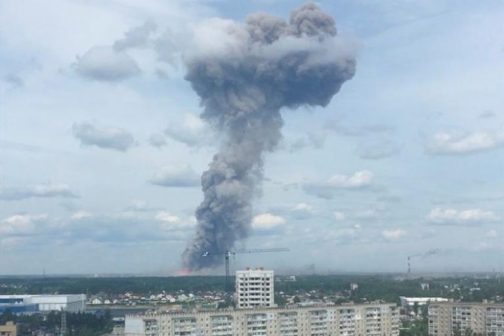 At least seventy-nine (79) persons have sustained various degrees of injuries during several blasts at the explosives plant Kristall shook the central Russian town of Dzerzhinsk on Saturday.

Naija News reports that the Russian health ministry said that the blast occurred around midday (0900 GMT) and shook the town of over 230,000 residents.

The blast had valued items damaged. The blast was said to have damaged windows in around 180 buildings.

Russian state TV Rossiya 24 showed footage of a plume of smoke rising over the explosives factory.

Russian state TV Rossiya 24 showed footage of a plume of smoke rising over the explosives factory.

The Kristall plant said that its director had been fired “literally a day before” the blasts for violating industrial safety rules earlier in the year.

The director was reported to have been blamed for an explosion that occurred in April and also destroyed a section of the plant.

At least thirty-eight (38) of the injured were at the plant when the blasts occurred but 41 local residents from outside the factory, many hit by broken glass, also requested medical help.

The health ministry said that 15 of all the injured were taken to hospitals, mostly with fragment wounds. One of them, a woman, suffers a severe injury.