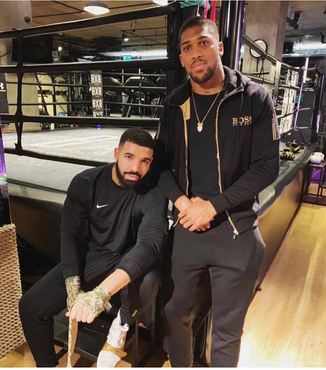 Boxing fans all over the world, have taken to the micro-blogging site, Twitter, to blame rapper Drake for “causing” Anthony Joshua‘s shock defeat to Mexican-American boxer, Andy Ruiz Jr.

This online news recalls that Joshua had taken to social media network, Instagram, 10 weeks ago to assure his fans that he would break the “Drake curse”, saying “Bout to break the curse. #June1st“ in anticipation of the fight against Ruiz but the reverse was the case.

Bout to break the curse ? #June1st

The Drake curse is a phenomenon whereby any team or athlete the Canadian rapper supports ends up losing a big event, a curse AJ vowed to break prior to the match with Ruiz but failed.

Moments after the match, boxing fans took to the Twitter, to blame the Canadian rapper for causing Joshua’s lose in the heavyweight fight.

I’m not even that superstitious. But I want to beat Drake ?

Don't snap with Drake if you want to Win ??

Man united did so lost

Dortmund did so and lost

Now Anthony Joshua did the same, and lost to ANDY RUIZ JR! pic.twitter.com/xchfmFbLo3

This Drake thing has become serious . Look at how this chubby boxer Andy Ruiz TKO'd Anthony Joshua and took all his belts pic.twitter.com/m573m7qv5Q

Drake curse: Do I look like a joke to you!

Not a single soul:

Anthony Joshua: Drake curse got nothing on me

When a manager see his athlete trying to take a picture with Drake pic.twitter.com/2iLNia0S26

3 weeks ago, Anthony Joshua says he will beat the ‘Drake Curse’.

The. Curse. Is. Real. pic.twitter.com/zFIJEIoxEh

Now Drake is the real deal. Anthony Joshua brags about breaking his pic curse and he got beaten by Ruiz. Damn. pic.twitter.com/4iuDeexW8O

Raptors might wanna tell Drake to chill after what happened to Joshua tonight lol pic.twitter.com/laQhJAoFEr

When Drake's curse is real. He just ended Anthony Joshua's career with a picture. A fucking picture ?? pic.twitter.com/EMjBynD7GD

Breaker of curse, father of dragons… You would have just avoided Drake ? https://t.co/y0z9XO2Tbu

This is MAD awkward… The Drake curse lives on. Even Anthony Joshua couldn't beat it. pic.twitter.com/p55qpsUzE2

Anthony Joshua got too bold with the Drake curse ?? pic.twitter.com/e1oG3qdQbu

Y’all remember when Anthony Joshua said he was going to break the Drake curse? LMFAOOOOO pic.twitter.com/LQOYZSCU2t

Imagine if Anthony Joshua went crying to Deontay Wilder in the parking lot right now to team up and beat Andy Ruiz together. That's what the Warriors did to LeBron after 2016.