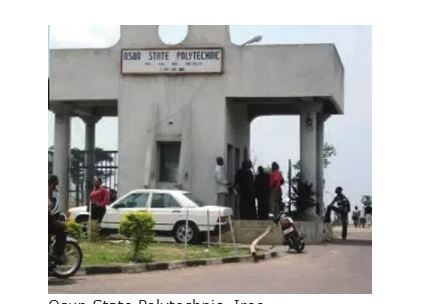 The management of the Osun state polytechnic in Iree has postponed the ongoing examination and other academic-related activities in the institution.

Naija News understands that the closure of the school is in a deliberate attempt to maintain peace and orderliness in the school and to mourn the sudden death of a Higher National Diploma (HND)1 student of the Faculty of Science, in the Department of Applied Chemistry, Aminu Hammed.

This Online News platform reports that Hammed had on Friday, May 31, slumped in the examination hall but was rushed to the school’s clinic where he was alleged not to have been immediately attended to but was thereafter referred to another clinic in the area where he gave up the ghost.

The students who were apparently angered over the death of Hammed, stormed some sections of the institution and were reported to have set the school’s clinic ablaze.

In the cause of the chaos, the school’s ambulance, drugs and equipment in the clinic were set ablaze by the students. Items worth millions of Naira were recorded to be have been lost as a result of the reactions by the angered students.

Naija News gathered that the management would communicate a new date for the examination.

When contacted, the Public Relations Officer of the school, Tope Abiola, said that to forestall breakdown of law and order on campus, the school’s management had ordered the immediate closure of the institution.

He said that all students had been directed to vacate the campus with immediate effect.