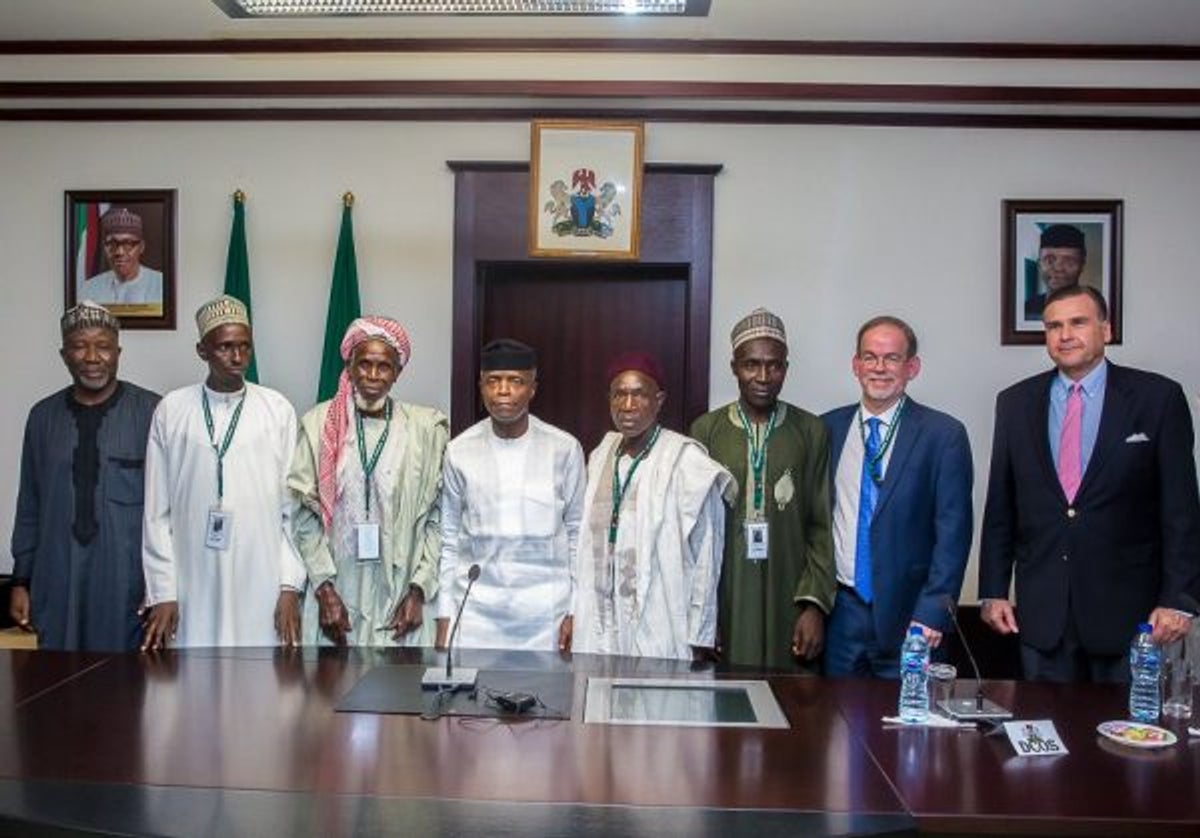 Today was a day of honour and praise for 83-year-old Imam, Abdullahi Abubakar,who rescued over 200 villagers from suspected bandits in Barkin Ladi Local Government Area of Plateau State.

This is because Vice-President Yemi Osinbajo higly commended him when he visited the Presidential Villa, Abuja.

Recall that on June 23, 2018, bandits reportedly attacked communities in Barkin Ladi, forcing many villagers to flee.

Over 200 of them were said to have found refuge in a mosque in Yelwan Gindi Akwati village, Gashish District, where Abubakar is the Chief Imam.

He had insisted that the villagers were his “guests” and would not allow them to be killed. Abubakar was said to have pleaded with the bandits by rolling on the floor.

The cleric visited the Villa on Thursday in company with several community leaders and diplomats from the US, UK and the European Union.

Speaking of the Imam’s heroic act, the VP said, “I commend you for your wonderful act. Imam Abubakar has demonstrated one of the most courageous acts any man can possibly do, by offering his own life, for those who are not people of his own tribe.

“I have heard a lot of stories in our country, but this is one of the most compelling stories. The love an individual can show for others not from their own tribe or religion, especially in a society like ours where tribe and religion often come to play.”

A statement by the Senior Special Assistant to the President, Mr Laolu Akande, quoted Osinbajo as saying that Nigeria would be a lot better if people would truly love one another and not on the basis of tribe, religion or ethnicity.

The VP further said, “It is far easier for people to create religious tensions between Christians or Muslims through their acts or words. And in a community where people have lived together in harmony and peace for so long, it shows how much a little of such tension created, in a matter of hours, can destroy harmony and peace built over the years.

“Most people in this country do not see the differences in tribe or religion, but it is easy to stoke religious tensions and divisions. So, one must be careful of those who want to play politics and create differences, using religion and tribe. This is not just in Nigeria alone, but all over the world. No tribe or religion is superior to another.

“When people have been wronged, it is always easier for people to accept that revenge or vengeance is the right approach. But as you know, vengeance breeds bitterness and hatred and doesn’t solve the problems created, but causes more deaths and harm.”

He recalled how the US Embassy in Nigeria recently honoured Abubakar for his “heroic deeds.”

The Imam, in his remarks, said he was not looking for publicity when he rescued the villagers, but felt that God only used him to save their lives.

The cleric, who spoke through an interpreter, recalled how his insistence that the bandits must kill him first before getting to the villagers forced the killers to change their minds.

Abubakar added, “I pleaded with the attackers in the mud and rain not to harm my guests. By God’s grace, no one was hurt. God created mankind differently but he wants us to live together in peace and harmony, and not harm each other. Such an incident (the attack) is rare in my community, but I hope such does not happen in my village again.”