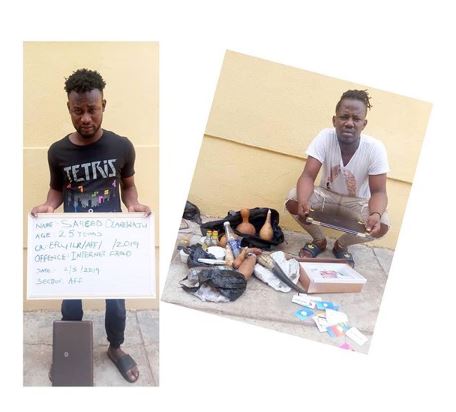 Naija News reports that the suspects who were recently arrested have been arraigned before a Kwara State High Court sitting in Ilorin, the Kwara state capital.

The EFCC gave the names of the suspects as; Johnson Okuselu and Akande Saheed. The suspects were arraigned on two separate charges before Justice Sikiru Oyinloye.

One of the charges reads: “That you, Johnson Opeyemi Okuselu (a.k.a Blessed Saviour) sometime in April 2019, attempted to commit an offence by pretending to be one Blessed Saviour, representing yourself to be a white Woman who is capable of providing job in the U.S to one Omni Guzman as contained in your email conversation done through your Gmail account.”

The Counsel for the EFCC, A.A. Adebayo, told the Court that the defendants had entered into a plea bargain agreement with the Commission.

The suspects pleaded not to be “guilty” of the charges against them.

Justice Oyinloye, thereafter, adjourned the case to June 8, for further review of facts, and ordered that the defendants be remanded in EFCC custody till the said date.