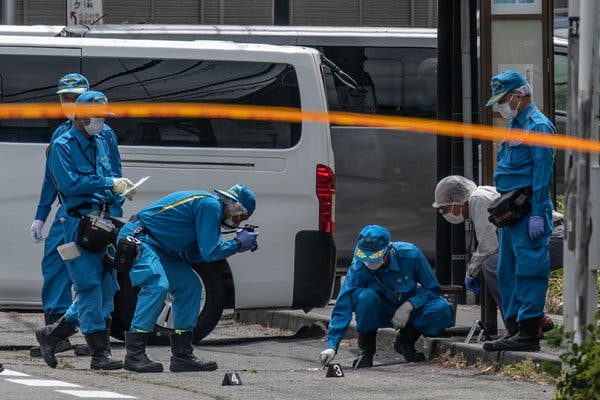 Two people including a schoolgirl have been stabbed to death and more than a dozen injured in Tokyo, Japan on Tuesday after a stabbing spree on children as they waited for a bus.

The yet to be identified attacker, who is in his 50s allegedly crept silently up behind a group of children at the bus stop and slashed randomly at them before fatally stabbing himself in the neck.

According to the police an 11-year-old schoolgirl named Hanako Kuribayashi and a 39-year-old parent, identified as government official Satoshi Oyama, died in the attack, which shocked a country where violent crime is rare.

Seventeen more people, mainly young children, were injured, according to authorities who had previously given the schoolgirl’s age as 12.

Koji Shimazu of the St. Marianna University School of Medicine, told AFP that one woman in her 40s and three schoolgirls had to undergo surgery for knife wounds to the head and neck.

“I offer my heartfelt condolences to the victims and hope the injured recover quickly.”

A local man living nearby, who identified himself as Matsumoto, 25, said he went outside after hearing screams.

“It’s hard to describe what it was like, how it sounded. It wasn’t girls having fun, it was a sound that was absolutely not normal,” he told AFP.

“I saw a man lying on the street. I also saw a girl hunched over on the ground. There were also five or six girls, maybe they were the ones who screamed… There was blood all over them.”

The attack occurred during the busy early morning commute as workers headed to their offices and children to school. Fire department officials said they received the first emergency calls shortly before 8:00 am (2300 GMT) Monday.

The scene of the attack was still swarming with emergency personnel hours later, with three police vans parked around the spot to block it from view.

Emergency workers set up an orange medical tent to treat the wounded, and ambulances and fire engines were parked nearby.

Teiko Naito, principal of the school’s elementary section, said in an emotional, televised news conference: “A man carrying knives in his both hands came from a convenience store and slashed children in the queue one-by-one.”

Assistant principal Satoru Shitori, who was on the scene, said the attacker crept silently up behind the children before launching his attack.

The director of Caritas Gakuen, Teturo Saito, said 18 of her pupils were involved.

“The grief is very great. I sincerely pray for those who died and hope the injured recover quickly… The students now have deep pain in their soul. We will do our best to offer mental healthcare,” Saito said.

The attack happened just about the time US President, Donald Trump wrapped up a state visit to Japan, and the US president offered his “prayers and sympathy” to the victims as he met troops outside Tokyo.

Standing aboard a Japanese military ship, he said that “all Americans stand with the people of Japan and grieve for the victims and for their families”.

A local resident, who declined to give his name, said children attending the Caritas school lined up for the bus at the site every day.

“If you live in this neighbourhood, everybody knows that these kids are there,” the 66-year-old told AFP.

“I’ve been in this area for a long time, I cannot believe that somebody targeted this bus and targeted these small children.”

Violent crime is extremely rare in Japan, and children often travel to and from schools alone.

The country has famously strict gun control regulations and gun crime is unusual, but there have been a few high-profile stabbing attacks.

In 2018, a man was arrested in central Japan after stabbing one person to death and injuring two others aboard a bullet train, an attack that prompted new security measures on the famed rail service.

And in 2016, a man stabbed 19 people to death at a disability centre south of Tokyo in what he described as a mission to rid the world of people with mental illness.