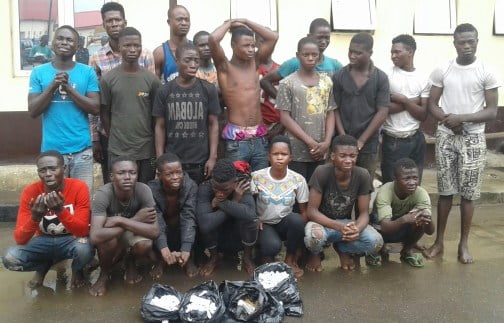 Operatives of the Ogun State Police Command have arrested four members of a popular and notorious cult group for killing a young a middle-aged man during a birthday party at the Abule Lemode area of Ijoko, near Sango.

Naija News reports that the incident happened when the members of the Rival cult group attended a birthday party in the house of a female friend identified as Oluwatoye Ogun who was celebrating her birthday at her father’s house.

The arrest of the suspect was made after the Agbado divisional headquarters of the Police received a distress call that Oluwatoye was celebrating her birthday in the area when the boys stormed the venue of the party.

The suspected cultists in their attack were said to have dashed a broken bottle against the head of the father to the celebrant who might have possibly challenged the unknown cultists; after that, the cultist seized one Sabiu Azeez, 26 who was said to be a member of another cult group, and left a broken bottle in his stomach while he bled profusely.

The cultists were said to have injured at least four persons in their attack believed to be a reprisal attack as preliminary investigation revealed that the deceased was likely a member of a rival cult group.

Those injured were immediately rushed to the hospital but Azeez died while receiving treatment. His corpse had since been deposited in the morgue for post-mortem examination.

While confirming the incident, the commissioner of police, Bashir Makama had since ordered the transfer of the suspects to the homicide section of the state criminal investigation and intelligence department for discreet investigation.

The police commissioner also reiterated his earlier stance against cultism in the state and vowed not to rest until cultism is completely stamped out of the state.