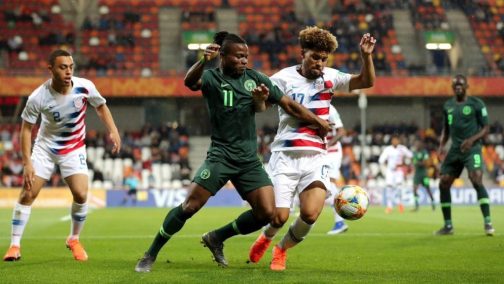 Two goals from USA forward Sebastian Soto in rainy Bielsko-Bialo condemned Nigeria to its first loss at the FIFA Under-20 World Cup in Poland.

U.S. coach Tab Ramos made just one change to the starting XI from his side’s opening 1-2 loss against Ukraine, and their 2-0 win was enough to drop the Flying Eagles one place from the group’s apex position.

An unmarked Soto nodded home Alex Mendez’s corner-kick service at the far post in the 18th minute, giving the U.S. a 1-0 lead.

Less than one minute into the second half Soto snuck past the Nigeria defence yet again, doubling his team’s advantage.

Nigeria were not without their chances, leaving the U.S. scrambling from a flurry of brilliant individual efforts towards the end of the first half.

In the end the U.S. held on to greatly lift their chances of advancing from Group D.

NAN reports that with this result both Nigeria and the U.S. have three points after two matches each, with one win and one loss each.

Ukraine who had earlier in the day defeated Qatar 1-0 however lead the group with six points from two wins after two games.

Nigeria are in second place ahead of the U.S. on goals difference, with Qatar in fourth place