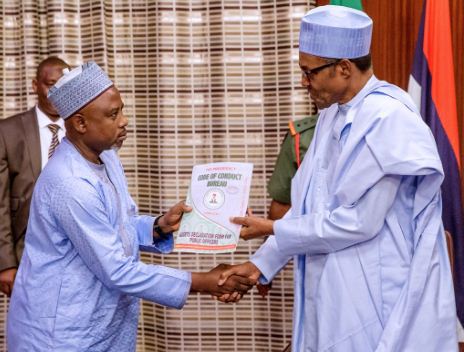 President Muhammadu Buhari, on Monday, received his assets declaration form from the Chairman of the Code of Conduct Bureau (CCB), Prof. Muhammad Isa.

This was disclosed in a post on Twitter by the New Media aide to Buhari, Bashir Ahmad.

The CCB had earlier disclosed that the President and Vice President Yemi Osinbajo are expected to submit their forms ahead of their inauguration on Wednesday.

After receiving the assets declaration form from Code of Conduct Bureau, President @MBuhari promises to fill and submit the form without much delay. https://t.co/Gg6QiSf79x