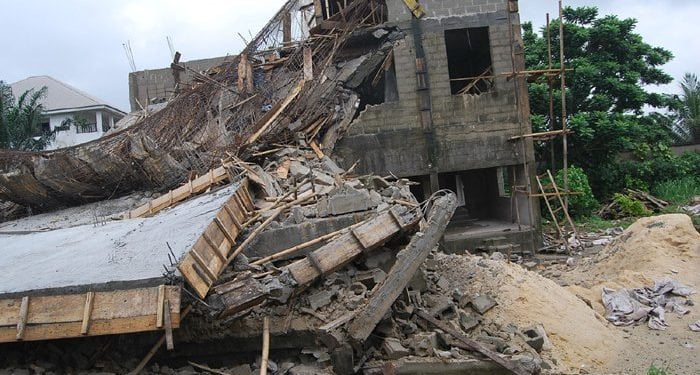 Two persons have been confirmed dead after a three-storey building collapsed on Wednesday in Onitsha, the commercial city of Anambra state.

Spokesperson of the state police command, Haruna Mohammed confirmed this in a statement in Awka.

Naija News understands that building collapse has been a recurring incidence across the country of late, with the most recent being the fall of a two-storey building under construction in Ibadan.

Mohammed’s statement read: “On 22/05/2019 at about 3pm, a building under construction located at No 9 Ezenwa Street, Onitsha belonging to one Barr. Ikebu Aso collapsed.

“Police patrol teams and other sister agencies rushed to the scene and cordoned off the area to checkmate miscreants and criminal elements from taking advantage of the situation to loot.

“Meanwhile, three casualties whose identities are yet to be ascertained were rescued alive from the collapsed building and rushed to the General hospital Onitsha by the Red Cross for medical attention while two others were certified dead by the medical doctor.”

He said their corpses had been deposited at the mortuary for autopsy, while rescue operations were ongoing.

Mohammed, however, noted that the case was under investigation to ascertain circumstances surrounding the incident.