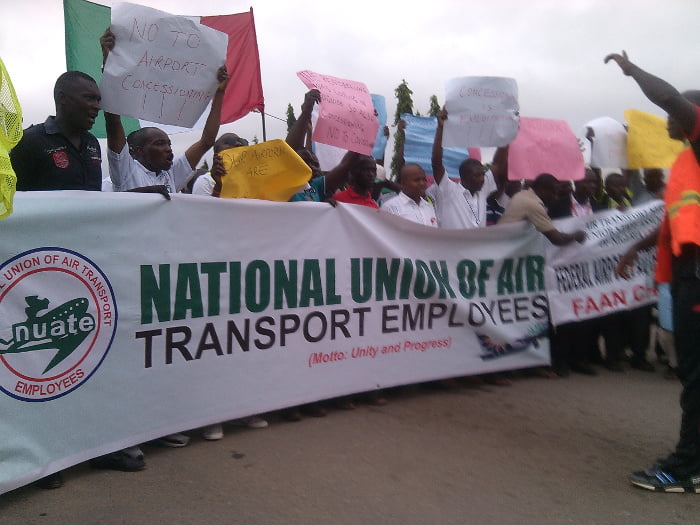 Nigerian Civil Aviation Authority (NCAA) at the Lagos airport today woke up to an indefinite strike by four unions who are protesting against the new organogram approved for the agency by the Federal Government.

The News Agency of Nigeria also reports that the Unions blocked the entrances of the NCAA headquarters and its annex office, chanting solidarity songs and carrying acards with inscriptions such as “Collapse organogram structure’’, “Our Mumu don dooo’’ and “Our demands: expanded organogram, staff, friendly condition of service, negotiated staff health and insurance policy’’.

However, flight operations at the nation’s busiest airport went on as scheduled as airlines and their passengers were allowed to go about their businesses unhindered.

Speaking on behalf of the Unions, the Deputy General Secretary of ATSSSAN, Mr Francis Akinjole, said the indefinite industrial action followed the expiration of the seven-day ultimatum given to management to resolve the issues.

“We did not choose this date because we gave them a seven-day notice which expired on Monday and the unions had reviewed it; and we decided that the best thing to do is to carry out this action. “This is because the management is of the opinion that we will never do anything and that is how they have been doing for a while now,” he said.

Akinjole said the present organogram was even outdated because the staff strength had increased which even needed further expansion. “There was a practical need to have an enlargement of the organogram and committee was set up. Even the Minister of State for Aviation, Sen. Hadi Sirika, was represented. “Then there was a ministerial committee that was set up by the minister and they met with the NCAA management and the unions which we called the tripartite committee.

“They deliberated upon how the organogram can be enhanced and solve the problem created by lack of vacancy in NCAA. “Unfortunately, when the report by the committee was presented to the minister two to three weeks ago, the report was something entirely different from what we agreed at the committee level. “Instead of enlarging, they collapsed some directorates. So the question now is what was the essence of the committee that was set up by the minister? ‘’ he said.

Akinjole stressed that the industrial action would continue until the Federal Ministry of Transportation (Aviation) and the NCAA management accede to their demands to review the organogram.

Reacting to the development, Mr Sam Adurogboye, General Manager, Public Relations, NCAA, said going on strike should be a matter of last resort according to extant labour laws. “The labour law is clear. The steps to be followed in declaring an industrial dispute is first to give 21 days. Next is 14 days and seven days. “It is failure to yield ground after the seven days that strike can follow. These steps have not been exhausted by the unions,’’ Adurogboye said.