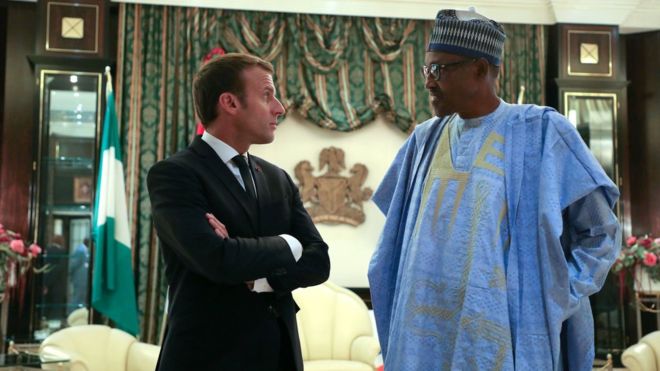 The President of France, Emmanuel Macron, has invited President Muhammadu Buhari to the Africa-France Summit holding in June 2020 in Bordeaux, France.

The invitation was presented by the Secretary-General, Africa-France Summit, Stephanie Rivoal, during a visit to the Minister of Foreign Affairs, Geoffrey Onyeama, on Tuesday.

Rivoal revealed that the summit titled "Sustainable Cities" was aimed at helping Africa find a solution to the rural-Urban drift amongst others.

She noted that President Macron wants the presence of Nigeria ta the summit because of the country's importance to Africa.

"I will appreciate it if President Buhari will come with a delegation of people involved in city development," Rivoal said.

Speaking further, the scribe stressed that the summit wanted to provide a forum in which "ministers share ideas with one another on concrete solutions to the development of cities."

"Stakeholders will be there to look at what is the best for the people that live in those cities.

"Besides, there will be concrete commitments by stakeholders and this will be followed up at the end of the summit," she said.

Rivoal also disclosed that the grand finale of the summit will be a football match between the World Champions, France, and the winners of the 2019 African Cup of Nations taking place in Egypt in June.

"The challenges in improving quality of lives; to slow down and reverse the trend of urban-rural drift is something we are looking at and we hope to attain.

"Building up the economy of rural cities is an excellent idea. We have to look at how to make rural cities friendly for the people.

"I am sure that Mr President will keep the date as it is something he will consider," the minister said.