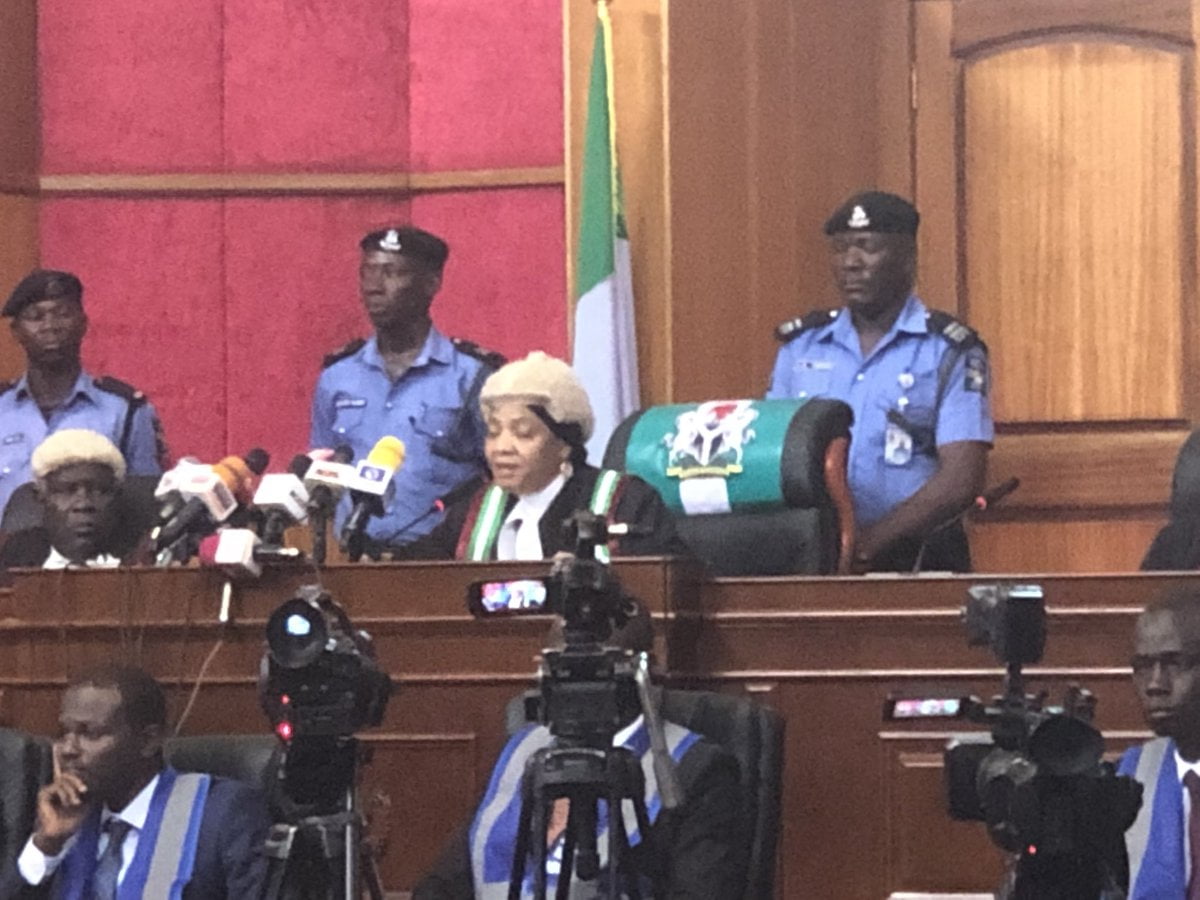 The 2019 presidential election petition tribunal continued its sitting today at the premises of the Court of Appeal in Abuja amidst tight security.

Recall the Independent National Electoral Commission (INEC) declared Muhammadu Buhari of the All Progressives Congress, winner of the February 23 election, defeating his closest challenger, Atiku Abubakar of the Peoples Democratic Party (PDP) with over 3 million votes.

Atiku, and his party, however, rejected the results and are challenging the results in court.

The tribunal’s Wednesday sitting is scheduled to hear an application by Atiku and the PDP for the disqualification of the President of the Court of Appeal, Justice Zainab Bulkachuwa, as a member and head of the five-man tribunal.

The main opposition party is alleging that Justice Bulkachuwa would likely be biased against them in her handling of the hearing of their case due to her alleged family ties to the All Progressives Congress (APC).

Naija News is on the ground to give you live updates of happenings. Keep refreshing this page for latest updates.

Keep refreshing the page for the latest updates.

The President of the Court of Appeal, and Chairman of the five-member panel of the Presidential Election Tribunal, Justice Zainab Bulkachuwa, has recused herself from the tribunal.

2:48 PM – APC lawyer wants Bulkachuwa to step down though he said PDP’s application is blackmail.

At the resumption of the hearing, lawyer to APC, Lateef Fagbemi urged Justice Bulkachuwa to step down.

“This is not the first time this is happening. Just recently, Justice Oyewole, whose immortal contribution was acknowledged by the counsel for the applicants a while ago, was written against not to be allowed to sit on the appeal panel on the Osun state governorship election petition. “As vague as the ‘likelihood of bias’ is, it has its own boundaries. “The exhortation in all the authorities that have been cited, recognise that each case will have to be dealt with on its own merit,” he said.

“My conclusion, with respect, is that the application is blackmail. On the facts and the law, the application is most unmeritorious. “But, with respect, next year, your lordship, the President of the Court of Appeal, will be bowing out gloriously by God’s grace. “Your name, either the one you acquired before you got married or the one you acquired after you got married, none is for you alone. You hold them in trust and you have been blessed – being the first female President of the Court of Appeal in Nigeria. “My lord, your youthful look may confuse one. You are old enough to be my mother. My lord, you standing in as my parent, I will say, ‘Mum, leave the matter,” the lawyer concluded.

The court goes on another recess after hearing on the HDP’s application. Counsels from both parties continue deliberations on the application for Justice Bulkachuwa to recuse herself from the election tribunal.

The PDP stood its grounds that Justice Bulkachuwa should recuse herself from the tribunal based on her links with the APC.

Lead counsel to President Buhari, Wole Olanipekun, however, argued that Justice Zainab Bulkachuwa, is at liberty to withdraw or not to, from the panel.

After hearing the submissions by parties involved the panel adjourned to 2pm.

11:30 AM – PDP’s legal team led by Levi Uzuegwu has asked for time to respond to a petition just received from APC. He requested Thursday.

Uzuegwu said the petition from APC was received on Wednesday.

He described the action by the respondent as an ambush against his client. His request for a stand down was approved as there was no objection from any other counsel.

11:22 AM – Protest erupts outside the court premises as pro-Atiku and pro-PDP protesters call for the removal of Justice Zainab Bulkachuwa from the Presidential Appeal Panel.

11:13  AM – The Hope Democratic Party (HDP) prayed the Tribunal to compel the Acting Chief Justice of Nigeria not to swear in President Buhari into office on May 29 as planned.

11:05 AM – Tribunal proceeds on a 30-minutes break as the petitioners seek time to respond to the counter affidavits just filled this morning.

10:30 AM – Festus Keyamo, the lawyer representing the All Progressives Congress arrives court premises.

8:00 AM- Security beefed up and Police announce diversion ahead of the resumption of the presidential petition tribunal’s resumed sitting on Wednesday.