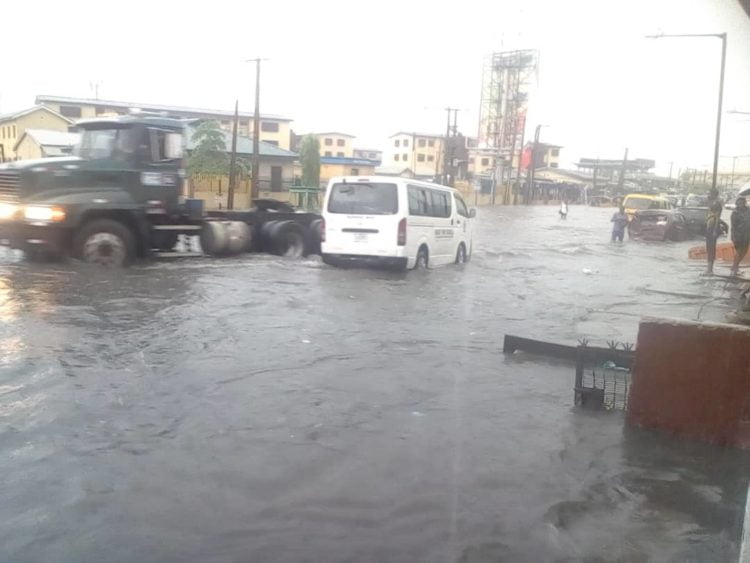 The heavy downpour that came on the city of Lagos yesterday have brought fallen trees, traffic jams, pulled down telecommunication masts and electric poles and more.

Naija News recorded that the flood fell a tree on a car at Kingsway road, Ikoyi while another tree fell along Toyin Street in Ikeja.

Lagosians were struggling all yesterday to cope with the aftermath of an early morning heavy rain that drenched the city and its outskirts, especially as some trees fell across major roads, The Nation reports.

Also, from Ikeja to Ikorodu; Marina to Apapa, Mainland and highbrow Ikoyi to Victoria Island as well as other parts of the city, motorists were stuck in the traffic that left wardens helpless.

The rains which started around 9 am continued for hours, leaving Commuters stranded and some cars and pedestrians trapped in the floods.

In Ikoyi, a tree fell on a car. Another was uprooted on the Alfred Rewane Road, forcing commuters to take another route.

At Ogba, on the outskirts of the city, a mast was uprooted by the thunderstorm. A tree was uprooted on Toyin Street, Ikeja.

At Oko Oba, Agege, a Lagos suburb, a motorist, Ekundayo Onilude, said two trees fell in the area around 2 pm.

He said “Two trees fell in Oko Oba in Agege due to the windstorm. One of the trees, blown off from the middle, fell on the road, near the Church Bus Stop; the other was from the root, it fell on a car around Olu Adebi Bus Stop.”

There was no casualty.

A LASTMA official who was deployed in Maryland, Olabode Odukoya, Zone 10 Zonal Head, said two poles were pulled with the transformer around Isaac John towards the Adekunle Fajuyi exit around 10: 30am.

He said: “The double pole fell with the transformer. The poles were joined together with the transformer in between. They fell while it was raining around 10:30 am. What we are doing now is counter-flow to ease traffic. It’s a dual carriage way and with the situation, we have to alternate traffic.”

The LASEMA Response Unit (LRU) on its Twitter handle reported that two buildings caved in due to the rain. One was reported to be in Abule-Egba and the other near Ladipo Bus Stop, Oshodi.

“A building, consisting four rooms, built on the fence of a house on 13, Erinjiyan Drive, Off Alhaja Mulika Street, collapsed due to the heavy rain. At Ladipo, it was discovered that no victims were trapped. So the building and the affected roofing were condoned off,” the agency wrote on its Twitter handle

A motorist in Ikeja, who simply identified herself as Ada, lamented that she had been in the stand still traffic for about an hour.

“I have been at this Ikeja Along Bus Stop for one hour. It has been a standstill and I do not know what to do. I can only beg that the government should do something to ease this heavy traffic whenever it rains,” she said.

A Badagry resident, Jonathan, said the area is usually a deathtrap whenever it rains.

“The road from LASU to Badagry is terrible; the roads are bad and the traffic is always terrible. I plead with the incoming governor to come to our aid,” he said.

The 7-Up – Oregun Road was blocked due to the collapse of a communication mast and an electric pole.

Ademola Ogunmokun, a commuter said the Lagos State Emergency Management Agency (LASEMA) otherwise called the LASEMA Response Unit (LRU), might have been overwhelmed by the huge demand for emergency intervention across the state.

READ ALSO  Buhari Reveals Where He Will Retire To And When

He said: “I think the LRU officials are up to the task only that the rains was experienced in all parts of Lagos and might have caused damages across the state.”

Mrs Titilayo Nelson, a resident of one of the blocked streets on Oregun Road, Ikeja, said that it was taking too long for the Ikeja Electricity Distribution Company (IKEDC) to remove the damaged electric pole.

She said: “There is a poor emergency response in this part of the world, when the rain stopped around 11 a.m, we put a call through to the IKEDC, to remove the collapsed pole.

“Up till about 2pm, they are yet to respond as you can see. They need not wait till we start experiencing casualty before they move in.

“Rain is a blessing from God and this is even mild in what other countries have experienced or experiencing, we just need to brace up.”