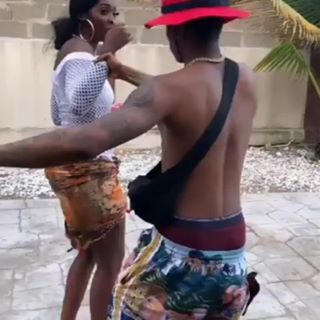 In the four seconds video, Wizkid held Tiwa Savage‘s right hand before spanking her bum-bum with his left hand.

The “Lova Lova” crooner, however, tried to retaliate but Wizkid moved away from the spot, laughing in the process.

Though the Nigerian singers are known to be best of friends, Nigerians in some quarters have tagged them as ‘lovers‘, no thanks to the visual of Wizkid’s hit single “Fever,” where Tiwa Savage acted as a video vixen.

On joining UMG, the singer had said, “My biggest goal is to make Africa proud. I’m so excited for this moment and I’m thankful to Sir Lucian Grainge and my new UMG family for their belief in my dreams. I’m looking forward to this next chapter in my career,” she had added.

As at the time of filing this report, neither Wizkid nor Tiwa Savage issued a statement regarding the viral video but Nigerians had since taken to the micro-blogging site, Twitter to air their opinions on the  “lovey-dovey” video.